RBI has mentioned two interesting things. One, that oil refiners are buying dollars directly from the market, since last week, and not from RBI directly through the OMC swap.

In August 2013, due to the tumoil in the forex market (the rupee had depreciated over 10% to 68 per dollar) the RBI had ordered oil marketing companies (OMCs) that import oil to buy dollars directly from the RBI as a “swap”.

The outer end of this swap was for the refiners to eventually buy from the market and provide the dollars back to the RBI, which was to be at a later date.

These oil refiners are, from the last week, sourcing their entire demand from the market. Meaning, they’re not buying from the RBI.

Remember, oil refiners buy $8 billion or so per month, and that demand has been kept out of the market so far. In early November, it was rumoured that the OMC swap would go away. Within a week, the rupee went from the 61 level to beyond 63, after which Dr. Rajan, the RBI governor, talked down the rupee saying c’mon, nothing’s wrong, oil companies are already buying from the market, etc. and the rupee came back down to the 62 levels. 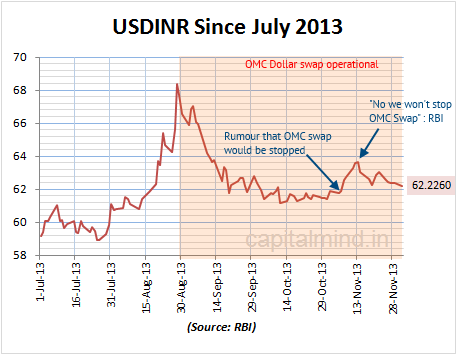 What I believe has happened is that RBI asked OMCs to get back to buying from the RBI, which reduced the pressure in the market. In the last week, it’s likely that RBI sold a lot of forex to balance out the OMC buying. Data to confirm will come only in Jan-Feb 2014.

The second interesting point is that the FCNR + Bank Swap – where banks could do a back-to-back swap for dollars against NRI’s foreign currency deposits, and get a three year swap at just 3.5%, or bring in dollar debt for markets minus 1% – has brought in $34 billion. This is a fairly massive amoung of money – and even if you consider that OMCs bought their entire $24 billion requirement from RBI, that should help augment reserves by $10 billion.