This is an archive for Capital Mind Premium subscribers; this was sent by email on 12th December 2013.

A Reminder For Trial Subscribers

If you’ve been on the trial subscription before November 15, your trial will expire on December 15, which is just three days away! If you’ve liked what you’ve seen, please do purchase a full subscription.

Remember, we have an offer that if you buy the annual subscription before December 15, we will extend your subscription till Feb 28, 2015. You get more than two months extra!

Today, at 5:30 pm we will see the release of two important pieces of data. The Index of Industrial Production (IIP) and the Consumer Price Index for CPI Inflation.

These will be used by the RBI to figure out Macroeconomic policy in their mid-term review next Wednesday (December 18).

The stock market will likely react to this data tomorrow (Friday). Let’s see what we can see about the data itself.

We already know that the IIP number might be deflated, because last time it was buoyed by IIP (Electricity) which shot up 12.5%. But the October data from the Central Electricity Authority tells us the electricity component has grown much lesser. This is also because the IIP Index rose substantially last October. But all else is not equal. We have some data about the Manufacturing pieces. Eight core industry data, which comprises about 38% of the IIP.

The Eight Core Industry data is like this, for October 2013:

And this eight core industries data was up 8% in September. Combine that with a drop in the electricity numbers and we can expect a fairly low IIP number released later today. (Unless something else has massively increased to offset this).

We don’t have a lot of data about consumer price inflation for November from outside. However, preliminary mandi price data shows that retail prices of food have remained high in November. They only dropped in early December.

CPI inflation for October was as high as 10.1%. This is unlikely to see a big downturn. 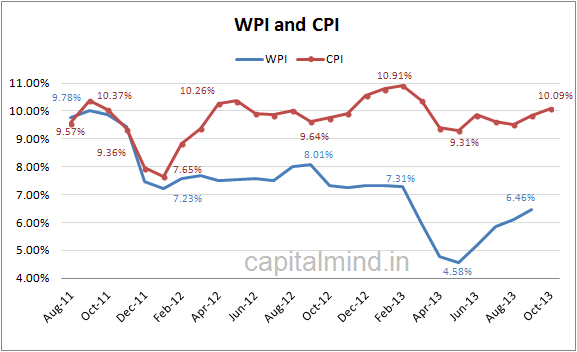 We are therefore likely to see high inflation numbers – and the rest of the economy has been seeing inflation at a high rate anyhow.

What will the RBI and Mr. Market do?

Given what we know, the data points to a lower IIP number and a reasonably high inflation number. Remember, GDP growth went up last month to 4.8%.

There is a market expectation that the RBI will focus more on growth than inflation. Manufacturing growth remains stunted, but we are more a service economy than one based on manufacturing.

Inflation has been noted to be a problem by the government, after the ruling party was drubbed in elections early this month.

But a -3% IIP number will be an argument against raising rates too much, especially if food inflation is likely to come down in the near future.

The RBI statements haven’t swung either way, and their policy review is on the 18th, which is before the Fed “Taper” meet on 17th-18th. (We might see India’s meet moved later by one day to accomodate this)

If the Fed does taper, it would make sense to keep rates higher; and that might tilt the balance in favour of a rate hike (25 basis points, of 0.25% at most). What a low IIP number does is to make it more difficult to raise rates.

The market however, is more likely to take a low IIP growth number and high inflation number on the chin, because it points to a continuing decline in growth. High inflation eats into "real" growth, and a low IIP number means we’re "really" growing lesser.

Disclosure: The authors at Capital Mind have positions in the market and some of them may support or contradict the material give
n above, or may involve a direction derived from independent analysis.