This is an archive for Capital Mind Premium subscribers, sent on 14th December 2013.

The Case of Strides Arcolab

Strides Arcolab recently sold it’s Agila Specialties division to Mylan for $1.75 billion. They will now use the money to cut out short term debt and distribute $525 million to shareholders, which translates to Rs. 500 per share. (They have about 6 crore shares)

Out of the payout, $250 million has been held back due to an FDA letter about one of the facilities of Agila, and the management believes that will be resolved in a year. When that money comes, CEO Arun Kumar says they are quite likely to distribute that as well.

Can I buy the stock now, and sell post dividend to claim a capital loss?

Short answer: You have to hold for at least three months after the record date.

Long answer: I know what you’re thinking. You have made humongous short term capital gains by investing in stocks this year, but now you have to pay short term capital gains tax at 10%. You can save that tax if you introduce a capital loss, but you don’t want to actually lose money. So you hope you can “create” a capital loss by doing what is called “dividend stripping” – buying before a dividend and selling immediately after.

The Income Tax department also knows what you are thinking.

There’s a law against dividend stripping, which says that if you buy within three months before the record date of a dividend, then you need to hold the stock until at least three months more, otherwise you can’t use the short-term capital loss to offset any gains.

However, given the quantum of this dividend (more than 50% of the stock price), it might be useful to hold for three months anyhow.

The record date is December 20, 2013. Purchases before December 18 will get the dividend.

Is the stock worth buying?

They have about $50 million of long term debt, and $75 million of cash after all of this.

However, the company sounds like a good deal, with Biotech research (they have a lot of ANDAs), biotech generics (a plant coming up in 2014) and a subsidiary in Sequent, a veterinary generics company. (Read this Forbes article)

These parts of the company could have a significant upside. I like the “lumpy” nature of biotech stocks, where you might not see much happening until one day things turns hugely positive because of a drug getting approved. I also think the ecosystem is very positive for a global player from India, considering the weakness in the rupee. The lower debt keeps the company off interest rate risk which is now a global issue for the next two years.

I like the company, and I’m willing to take a risk. Yes, Indian pharma companies are taking a beating from the US FDA, but I believe some of it is driven by competition and fear. (And that remains a risk)

We saw some institutional selling recently. The share just bounced of near term support.

While we have been speaking a lot about the Macro in the Capital Mind Premium letters, we’re also going to start building a longer term portfolio with just 10-15 stocks. This stock portfolio is hugely volatile, so we d*o not “recommend” these stocks, or provide “tips”. There is an analysis that describes the case, and we just allocate the stocks to a portfolio. (And we take real positions in it)

Review: What Happened to IIP and CPI Inflation?

Just as we’d predicted in the last premium letter, IIP came in quite low at -1.8%. While it was something we could glean from public data, it seems the market was quite surprised, dropping 1% yesterday after the news.

CPI Inflation came in at a ludicrous 11.24%, which is even higher than we expected (and we expected a “high” number, largely from food inflation, which seems to have been the case). 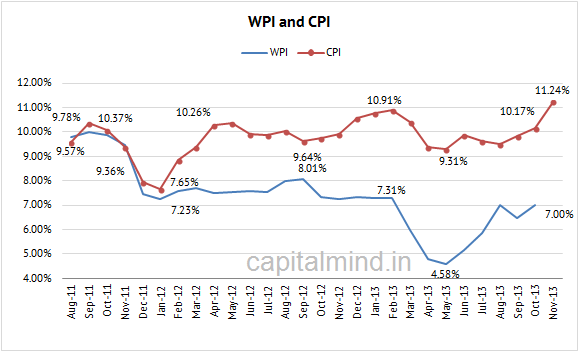 Impact: The immediate reaction of Dr. Rajan, Governor of the RBI, was to state that inflation was higher than he would like, and growth was lower than he would like. But he would take a measured view, he said. The problem is that the FCNR swap has resulted in Rs. 60,000 crores of additional money printing, and inflation is, in the end, a problem of too much money chasing the same goods. Yes, it could be solved by government measures now, but the too-much-money thing is all RBI.

We expect a small rate hike if on Monday, WPI inflation is above 7%.