Financial Technologies and it’s founder Jignesh Shah, along with two key people (Joseph Massey and Shreekant Javalgekar) have been declared “not fit and proper” by the Forward Markets Commission (FMC). This is with respect to the mega-5,000+ cr. default at NSEL, which has lost money for over 13,000 shareholders via a financing scheme that was disguised as a valid commodity exchange transaction.

The detailed 80-page order has enough, according to FMC, to nail Shah and others as people who knew and therefore owned responsibility for their acts. Among the wrong doings: 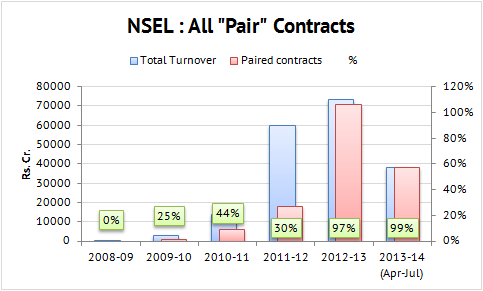 These are not isolated cases of poor governance but a deliberate ploy by a technology driven parent company (FTIL) to facilitate these wrong-doings with full knowledge of directors, promoters and the holding companies.

There’s a lot more in the order.

The net effect is that Financial Technologies and three people: Jignesh Shah, Joseph Massey and Shreekant Javalgekar are declared not fit and proper. This means they have to get out of the MCX board and shareholding. (The individuals are already out of the board)

My view: This is a good thing. I don’t know about appeals and whether it will stand the test of the judicial system, which in our country largely means that if you’re rich you are probably not guilty and even if you serve a jail term you can get parole to visit your wife who is sick from attending too many parties the previous night.

But an order, however small, is good to retain some confidence. However, unless we see people go behind bars, and are not allowed parole, it’s only then that justice will be served. How do we know this kind of scam will not happen – or is not happening – with other exchanges? How do banks know that the warehouses they finance actually have goods that they say they do? A large part of the system is still based on the trust of management, an auditor or such.

At this point, I am jittery even about my Gold ETF, even though there hasn’t been much doubt about that. The seeds of doubt that have been created will never really go away. The fit-and-proper is a start, and it prevents these people from participating in some kind of exchanges. But things must go to their logical end – a judgement and a prison sentence for the parties involved, who may be these or others.