The state election results are out: the Congress has been decimated in nearly all of the four states for which results were announced yesterday. (It is, however, leading in Mizoram, where results are being declared today)

With a BJP majority in Madhya Pradesh (72%), Chattisgarh (54%) and a whopping 81% in Rajasthan, the mood of the country is fairly clear. That they don’t like the ruling party (Congress) at the centre; the state moves reflect that sentiment.

Delhi poses an interesting situation with the Aam Aadmi Party (AAP) getting 28 of the 70 seats, and the BJP 31, and the Congress lost with just 8 seats after ruling Delhi for 15 years.

The markets have cheered the result, with the Bank Nifty going up 3%, and the Nifty up 2% in early trade. The reason? That this reflects a thumbs-up for the BJP in the parliament elections of May 2014, with enough strength to help push the economy forward after the Congress’ dramatic failure to do so.

The Nifty has hit it’s all time high, crossing 6,400 in early trade before reversing back down: 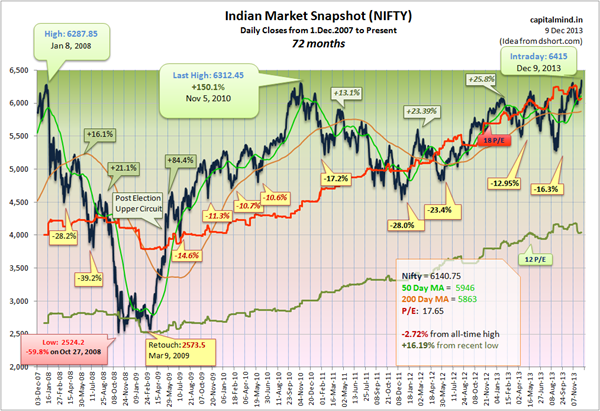 The month of December has already seen a 3% move. But there are headwinds:

In addition, we have to worry about how the Congress, which controls the centre until May, will react. With a two month window, will they announce new sops in the hope of winning back elections? We sure hope not, but bond yields rising to 9.18% (May 2023) and 8.85% (Nov 2023) show that the bond markets might expect something like this. If the government spends more, it has to borrow more, and viola, bond yields go up (and prices come down).

The correct trade is to follow the trend, and it would not be wise to short this market just yet. However, banks seem to have run away ahead of the rest of the economy and the banking index being up 3% makes it a better short target when markets begin to reverse. But the all time high is a time to go long if you are a trend follower.