Yes, you can now buy Inflation Protected Securities. RBI has announced that these bonds will be available for purchase between Dec 23 and Dec 31, 2013. 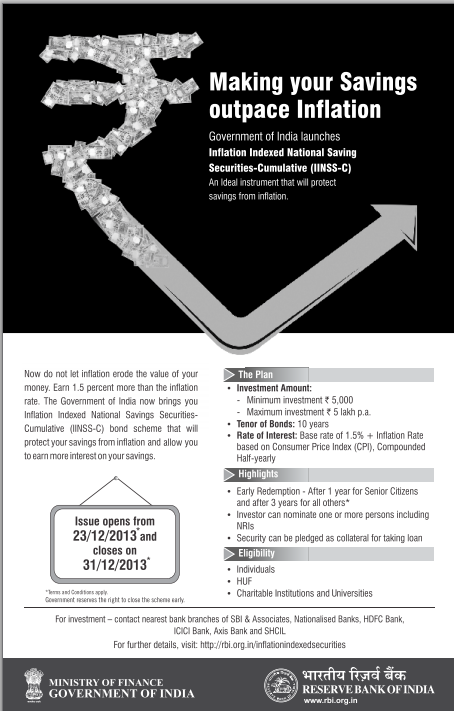 What are Inflation Protected Securities?

At the risk of repeating myself:

You get inflation plus 1.5% per year. How do they calculate inflation?

Inflation is based on the Consumer Price Index released by MOSPI.

When you buy the bond, your base inflation index is the one 3 months earlier. Every six months, interest is calculated as:

On the left, you will find the CPI Index for various months as released by MOSPI. You can find new data on Capital Mind every month.

This interest is added to the principal (the concept of compounding).

The interest payout has a lower floor of 1.5%. Which means, even if inflation is negative, you will get a 1.5% return minimum.

The biggest risk is that interest rates offered by alternate products will yield higher returns. You must consider factors like taxes and liquidity to assess other forms of risk.

You will be able to redeem early if you’re 65+ after 1 year. For others, you have to wait for 3 years.

You can only redeem “a few days” before the coupon dates. These will be once every six months. You will have to approach one of the banks (SBI, Axis, HDFC, ICICI) or SHCIL for that.

The prepayment penalty is half the last coupon paid. Meaning – if they have to pay you Rs. 1,000 for the half yearly interest, they’ll pay you just Rs. 500.

When Inflation is very high, the prepayment penalty is huge.

Liquidity: Can’t Sell It – There’s No Market. But Can Get Loan

If you can’t redeem it, can you sell it? No.

The “transferability” clause states that the bonds can only be transferred in one condition: to a nominee after death.

Even though Non Resident Indians can’t buy, they can be nominees.

But you can borrow against this as a security. Which is good for an ultra-desperate situation, as against early redemption and a penalty.

Taxes: Interest only at Maturity But Pay Tax Every Year

These are not tax free bonds. Therefore, the interest is taxable. Like a “National Savings Certificate”, you must declare the interest every year as income and pay tax on it. Even if you aren’t even getting the money in your pocket.

These bonds also don’t currently apply for tax savings under the 80C bracket. We might see that happen next year, I hope, but let’s not count on it.

There are tax free bonds from the likes of NTPC which offer 8.66% (tax free) on the 10 year term, with the ability to sell early in the markets. PPF also offers 8.7% tax free interest.

There are liquid funds and Fixed Maturity Plans yielding 9% post tax if you hold for a year or more. But this is not guaranteed over 10 years. CPI inflation is mainly food (49% weight) and food inflation has been 14.5% recently. If prices are looked at recently, we find that food prices have fallen substantially.

That means CPI might not increase at the rapid pace it has done recently. Food contributed 7.3% of inflation in November (of the inflation of 11.2%). Even if the rest of the items stayed where they are, and food inflation fell substantially, you can see CPI inflation at 7% next year.

This is a pre-tax return of 8.5% which compares weakly with other products where the lower taxes make them more attractive. (Tax free bonds, FMPs, liquid funds)

However there are good reasons why food inflation might continue to go up in the next 10 years and keep CPI high:

You have to take your call. And then, there are the issues of lack of liquidity and taxes.

For someone in the 30% tax bracket, even an interest of 11.5% means less than 8.5% after tax. The attractiveness of this product therefore depends on your earning potential, and the fact that you can only invest Rs. 500,000 maximum makes it more attractive for middle-class savings (tax rates of 20% or lower).

I spoke with Manish Chauhan of Jagoinvestor, who has a splendid post on the topic. He says:

I see them as excellent alternate to traditional insurance products. Given Indians are crazy about Traditional insurance because of ‘security’ and ‘guarantee’ . These bonds can be a great alternative for those investors , because these bonds atleast protects from your inflation, though taxable, still its one of the things one can invest in for some part of their portfolio.
Given taxation angle, For those who are in lower tax bracket, its a good place to invest for their long term goals like Children Education or Corpus creation if one is too scared with inflation (and they should be)

Very likely, for part of my children’s bond portfolio where I don’t need the cash flow, as an HUF which has low income so I get taxed at a lower rate. The only pain point is the lack of liquidity.

It could be good for senior citizens (60+) who need to ensure that their money is kept away from slimy bankers, and who want an annuity at a much better rate than anything else available currently. But even for them, the lack of interest rate being paid out is a concern.

The product makes sense for anyone in income brackets that are less than 30%, but you have to buy the idea that inflation will remain fairly high over the next few years. If CPI inflation falls, your return comes down appropriately. (In which case the fixed coupon tax-free bonds or PPF is a way better idea).

Also, do check out Capital Mind Premium , where we provide high quality analysis on macro, fixed income and stocks, have great portfolios, and a brilliant community for conversations.