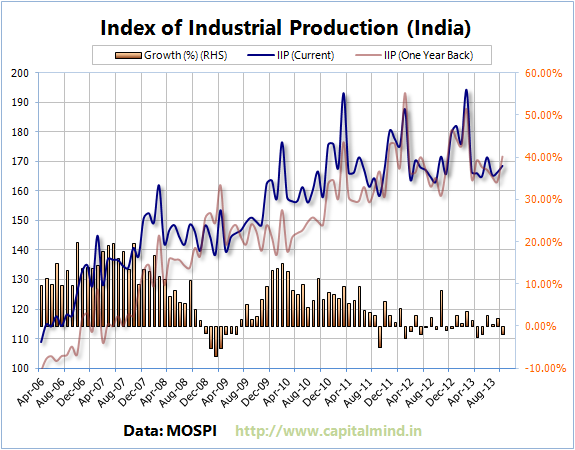 I’m going to state here that we at Capital Mind Premium predicted the IIP Electricity number last month itself, with a +1.5% estimate then. In fact in the premium post sent today we expected the IIP data to be deeply negative based on the publicly available component data.

While we know that the second quarter GDP (July to September) was +4.8%, October comes in Q3 and this has been a deeply negative month. If we are indeed “recovering” then the numbers for November and December need to be significantly better than the IIP tells us.

Recently we have had very tiny corrections so I believe this data might be getting more and more trustworthy. IIP for July 2013 was originally at +2.63%, and has been changed down marginally from a revised +2.75% to a finally revised +2.57%.

Data shows that the “Rubber Insulated Cable” which has mysteriously risen in the last three months, is still at +143%. The production of Commercial Vehicles is down 22%, as is Kerosene (down 24%) and Sugar (-71%!). Because of the crunch in gold supply, Gems and Jewellery production is down 40%.

Let’s look at the use-based indexes: 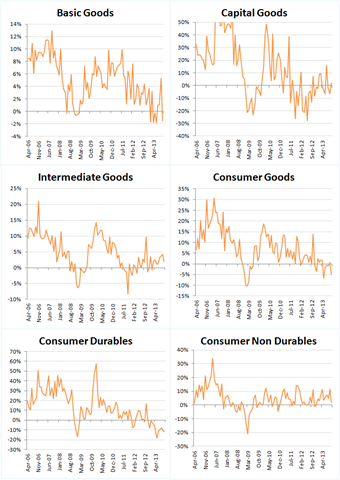 Consumer goods are taking it on the chin, and durables are down 11%. Everything shows a down-trend.

Impact: While IIP is not as big a deal nowadays, the market being at new highs is not likely to take this well. Combined with high inflation, things aren’t looking great for the Indian economy, recent state election results notwithstanding.