So it’s time to bid adieu to Apollo Tyres for a while. After a long time I exit without a trailing stop, largely because this is where I thought the stock would end up. 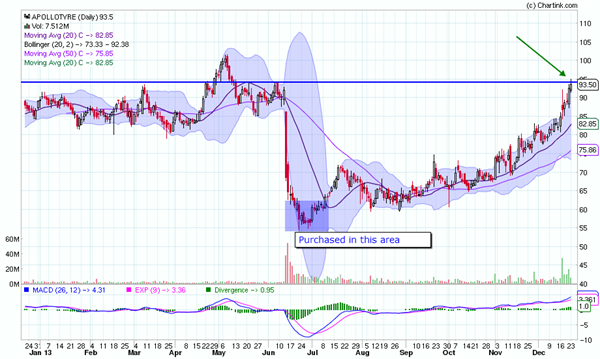 Apollo had put in a $2.2 billion bid to buy Cooper tire. That deal got quagmired with the US employees attempting to negotiate a higher wage settlement, and the Chinese subsidiary revolting and not allowing Cooper officials entry or financial data. The deal had to be finalized by December 31, and Cooper blamed Apollo for dragging its feet looking for a lower price. The courts then refused to force Apollo to move faster.

With the deal in cold-storage, Apollo has retraced its entire down move that was on the concern that the deal was too expensive. My contention on the entry was

a) either the deal goes through and Apollo benefits in the long term, or

b) the deals falls and Apollo recovers to the earlier levels.

It’s now unlikely a) happens – just seven more days to the deadline. And if it’s going to be b), the upside has already been reached.

I’ve exited around the Rs. 94.5 level, and that’s the end of this leg of the investment story for me. Too often we talk about when we should buy, but don’t articulate when to sell. My investment hypothesis has worked; it’s time to book the profits. (If the stock were to go up further, I would need a new hypothesis to invest)

Note: Let me not undervalue the effect of luck. And yes, many other stocks have done 50% or more in the same time: Tech Mahindra, Arvind Mills, Biocon and even TCS.