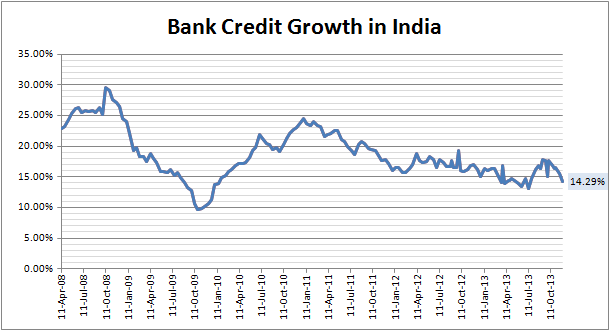 Credit growth has improved in the July/August timeframe, but has now dropped back. A weak economy will see lower credit growth.

The RBI has pumped in a lot of money into the system already (over Rs. 60,000 cr.) due to the FCNR dollar swaps which resulted in a net addition of $10 billion into the forex reserves. (An increase in forex reserves means that more rupees are printed by the RBI)

These rupees will come into the system as deposits, and will necessitate lower ‘overnight’ borrowing from the RBI as banks remain flush with funds. However, when this money flows into the system as credit (not just deposits) then it will stoke inflation as well, because credit “multiplies” money supply. Every rupee printed by the RBI – and there are 15 trillion rupees thus printed by the RBI – will be lent by banks, taken back as deposits, lent again, and so on.

Total deposits in the country add up to Rs. 75 trillion (75 lakh crores) which is a multiplier of 5x. The additional amount of money that the RBI’s FCNR swap can add is now about 300,000 crores (Rs. 3 trillion), which is a 4% increase in money supply within a short time.

Without efforts to curb this money supply growth – through higher interest rates or selling of foreign currency, we will see inflation staring us in the face again next year. And each time, it will be a bigger monster.