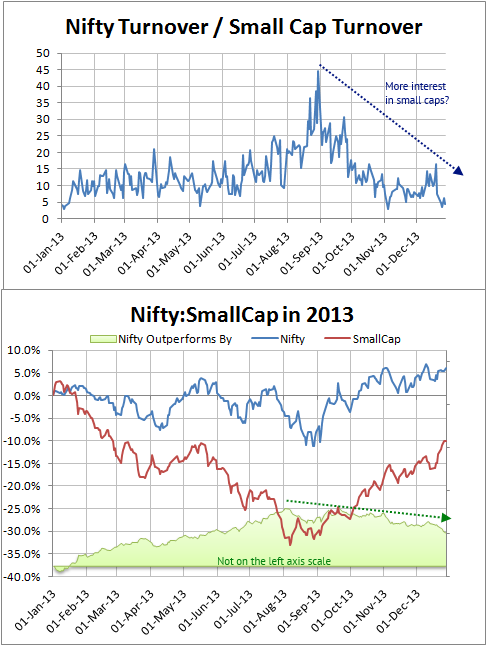 The Nifty:Smallcap turnover ratio has come to yearly lows, and at the same time, the smallcap index itself has underperformed the Nifty massively in the year, down 10% versus Nifty’s +6%

But the green area at the bottom is the actual outperfomance (the difference between the Nifty’s and Small cap performance relative to the start of the year). That tells use that while the Nifty outperformed till September, things have changed quite a bit since then, with volumes shifting towards the small caps on a relative basis.

Since institutions don’t usually trade the small caps, you can assume that the trading volumes dictate shifts in retail investors and broker sentiment. Purely looking at volumes (instead of ratios, we can see interest increasing to the small caps. 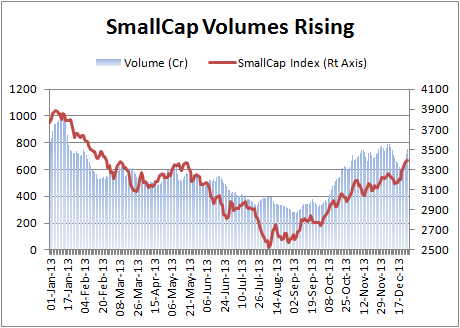 (Volume is the 10 day average to smoothen things out)

Nifty volumes are pretty much stagnant. While we did see something like this in 2007, it’ll be interesting to see if the smallcap index regains its highs on even higher volumes.

Impact: Be careful whenever there is accumulation in the small caps but consolidation in the large caps. It indicates a potential crash due to retail investor overbullishness. But I’d be careful at this point since both numbers are abysmally low and their relative new-high is still lower than the volumes in 2007!