Twitter has listed on the NYSE (TWTR) at a 76% premium to the IPO price of $26. The closing price was $44.90, giving the internet social media company a market cap of $24.46 Billion. To give you an idea of what that means: This is a valuation of Rs. 2.75 trillion, which is higher than all but two companies in India (Reliance and TCS). 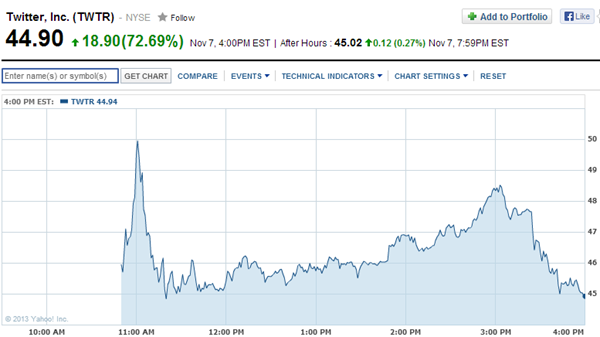 The Twitter IPO has however scared off people from other social media companies.

The US market itself was down overall yesterday.

Some might think this was bad for twitter as they could have gotten a higher valuation in the IPO itself, and they sold their shares cheap. I think that’s a wrong way to think – the company gains a lot by a blockbuster valuation and the value to the company and other shareholders is much greater if the stock price is seen as rising. Look at LinkedIn, which priced at $45, and is now at $211. And then at Facebook which priced at $38, then fell to the $20s and is still in the $40s.

In India, I believe the big sites have to go list. Indiatimes, Flipkart, Snapdeal, Zomato, Cleartrip, One97/PayTM and other businesses hesitate to list because of tough laws that require 25% dilution (at least) if your company is valued at less than 4,000 cr.. (Just dial was forced to dilute 25% because of this!) These are stupid regulations in one sense – who is SEBI to decide what level a company should list at? But the 25% rule is not a bad one – the more shareholders you have, the better it is, and further rounds of dilution will be a much higher premium if you are a first mover. (Just dial IPO’ed at less than Rs. 500, now it’s 1100 in less than six months!)

MakeMyTrip listed in the US and valued richly.

I look forward to more Indian online businesses listing, so we get better companies to buy. I think leaving a lot of money on the table for the IPO is a good thing – and in the longer run will benefit the company very much.