The interesting thing is that with the term repo and the regular repo (both around 40,000 cr.) we see demand for the MSF diminishing. The MSF is now getting lesser and lesser as the operational rate. 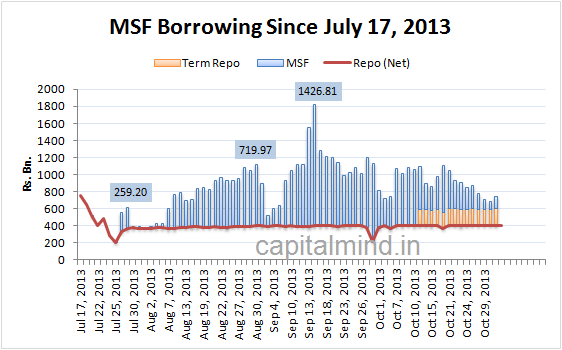 The next time this chart is updated you will see term repo being double of what it was since term repo limits were also increased.

Let me state that I’m all in favour of a bid repo rather than fixed rates, both for overnight repo and term repo. That way it is obvious how much banks want to pay for liquidity. There should be no rep limits – as long as you have securities, go ahead.

Having said all this, the operational short term rate is now falling – from the MSF level of 8.75% to a hybrid of the repo/term repo rates (7.75% to 8.4%). The market rates (CBLO, Call money, market repo) are trading between the 7.75% and 8.75% limits, which means liquidity is no longer tight.

While markets are rejoicing and banks are bouncing back, the fact that rates – hybrid – are still lesser than CPI inflation bothers me. Note carefully that much of this turmoil has not translated to any further market (except in short term mutual funds). Bank lending and deposit rates remain the same, which means there is no real “transmission”. Controlling inflation is going to need much higher rates, even if they seem to have stabilized.