Dr. K.C. Chakrabarty has a presentation on defaults, which tells you how the trend is changing – where defaults are becoming bigger and bigger as a part of the overall system. Here’s a few graphs, followed by the actual presentation.

NPAs, or Non Performing Assets, are essentially bad credit – that is, when people stop paying back their loans for at least 90 days.

The NPA trend is increasing: 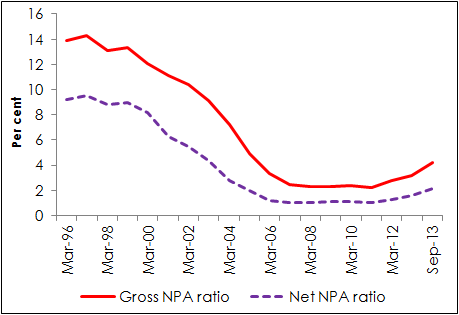 This is the ratio of bad loans to total loans. The “Net” is simply the gross number minus whatever has been provisioned against the fear that nothing will be recovered, minus what has already been recovered, and minus any interest charged that might not be recovered (as in, they might only get the principal back). 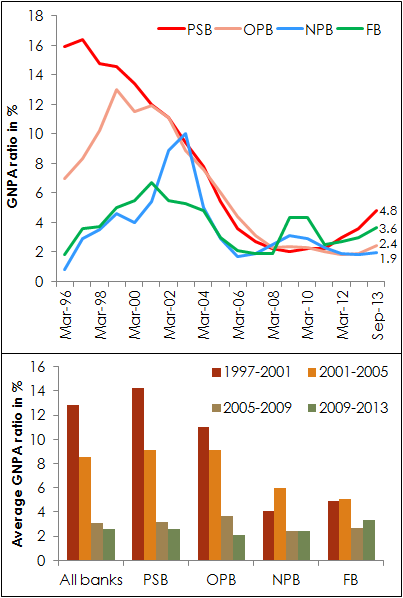 The best performer has been the new private banks, but that’s mostly because the GDP slowdown is first industrial, and most industrial loans are given by public sector and old private sector banks – much of the rest haven’t yet been impacted. (That’s my theory, at least)

Slippage Ratio Near All Time Highs 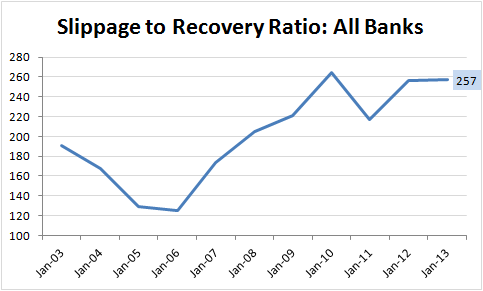 If you look at Slippage (which is the addition of new NPAs) and Recovery (which is what you have gotten out of old NPAs), then it tells you something about flow – if you’re adding at a lesser rate than recovering, you will not see major deterioriation. However, we are seeing 2.5 times as many NPAs added as being reduced.

While agriculture has a higher Gross NPA ratio, Industial exposure is greater.

I would not be long banks in the medium term (2 to 5 years) because the cycle could easily get worse. However, a fear of defaults might make banks much more attractive, especially old private sector banks, and some public sector banks.