RCOM has a great offer for the Apple iPhone 5 (C and S), where you pay very little down, pay every month instead for 24 months, and then get all voice, SMS and data for free, unlimited. But how good is the offer? First, if you’re one of those mad Apple fans that will only use Apple products no matter what the rational argument against them, just because they’re Apple, then you should stop reading here because you couldn’t care less what the economics is.

Now, let’s see the offer. From the press release:

As a bundled deal, the transaction gives you a phone and two years of services free, as long as you pay a fixed amount every month. You get unlimited data, unlimited (India) calls, and unlimited SMS (limited to 3K texts per month).

What you do is:

For the example above, You need an available limit of Rs. 62,000 or more to avail this facility – the entire amount gets swiped and converted to an EMI. This is like a retail transaction to EMI scheme that many banks have.

Every month, your EMI will pay principal and interest. The principal paid will free up your limit every month: 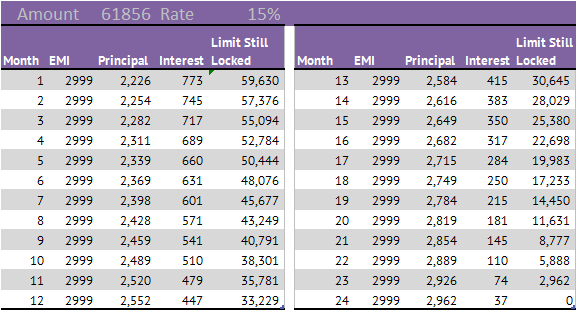 You are paying 15% interest for this loan, which is competitive.

What isn’t apparent is “service tax”. You will need to pay 12.36% service tax on the interest component. This adds up to another Rs. 1,000 over the term of the loan. (See SBI Terms)

Minimum Amount Due and Reward Points

Every month your credit card comes with a “Total Amount Due”, a “Minimum Amount Due” (which means you roll over the rest). Assume things are the same for the card balance (beyond what’s blocked for the iPhone purchase), and your minimum amount due will be whatever it used to be earlier, plus the EMI amount.

If for any reason you can’t pay the “minimum amount due” you will then have penalty charges and interest (usually very hefty, more than 3% a month).

Can You Run Away With The Phone and Not Pay?

Of course you can. But that’s like saying “Can you steal my car?”

Your loan is from a bank (that issues the credit card), not from Reliance. So if you default, the bank will come after you for the loan. They will add you as a defaulter to CIBIL.

They don’t care about whether you have decided to become an Android fan, and they will not cancel the loan if you give back the phone. You have to pay the full amount, and they can get a hold of you even  10 years later. Your credit card will be blocked – because you’re not defaulting just on this, it’s a default on your card dues.

My advice: Just Don’t Do It.

If the person giving the loan was Reliance – and it used to be the one taking the risk in 2000 when it introduced phones for Rs. 500 apiece – the risk would be of Reliance and they have shown they aren’t very good at catching people who stiff them. But a bank is a different proposition.

Why is Reliance doing this?

Effectively, RCOM will get about Rs. 22,000 as a margin on this product, and this should cover what it costs to provide the free services for 24 months. This comes to about Rs. 1000 per month as a discounted return. Providing an “unlimited” service with a definite customer for 24 months isn’t a bad deal (even if you walk away, they still make that much money since its paid upfront).

Which also means: if their service sucks big time, you can’t do a darn thing, because you have already given them your money for 24 months.

Network woes: If you buy this phone and you’re not already a Reliance subscriber, you might have to change numbers (or port your number, which could be painful). The Reliance 3G network isn’t available everywhere (it’s not in Bangalore, for instance) so you might find that a pain.

Upgrades: There will be an iPhone 6, and then 7 or whatever. The bank doesn’t care. You don’t get the upgrade, unless you pay for it separately. This is what makes this deal very different from the operator deals.

The above chart shows you that you have about Rs. 33,000 left to pay after a year. That means a year later, if you want to upgrade to an iPhone 6, you will still have to pay Rs. 33,000 and then buy the other iPhone. You might be able to sell this phone and enter into a fresh contract for the new one, but that will require RCOM to unlock your phone (who’ll buy it if it’s locked to your number), which is a pain.

No LTE (yet): Want an even faster connection? RCOM’s offer comes with 3G, but what when they roll out the 4G LTE? You don’t get the faster speeds for free, most likely.

What are the alternatives?

Perhaps you won’t get all the freebies, but think about your usage. I use a prepaid Airtel connection and I don’t pay more than Rs. 1,000 per month for voice plus incredible amounts of data. You also get the advantage of being able to use it on different networks and without changing your phone number.

However, even if this amount is converted to an EMI for 24 months at 12% per annum (the lowest that you will get), you still pay Rs. 2,500 a month for the EMI, plus now you have to pay for usage, which is likely to be higher than Rs. 500 per month. So it might not really be worth it.

You can use their “discounted option” of paying the full amount minus Rs. 6,000. For an iPhone 5S, you pay Rs. 66,000 upfront for the same deal. This makes little economic sense, as the EMI option is an effective 10% more, for two years, which is better (even if you have the money).

And then, of course, you could use an alternative phone itself. I have a 5 inch Android Micromax Canvas HD 2 bought for 14K in April with 32 GB extended memory, and I use it as a phone, a camera, an alarm clock, a trading terminal, a twitter client, facebook, email, tv-remote (!), and a music player. Sure, you might miss the fingerprint recognition or iTunes, but I couldn’t care less.

I know some of you think little of brands like Micromax; I don’t go by brand value. I’m always rooting for the underdog.

Where Do We Stand?

You should take this offer. If any of the above are a potential no, you have to figure out if it is a calculated risk or a potential waste of money.

(Or, if you’re a mad Apple fan, ignore everything above and just buy it)