The Index of Industrial Production (IIP) for September 2013 has come in at +2.0% in what seems to be a surprise. 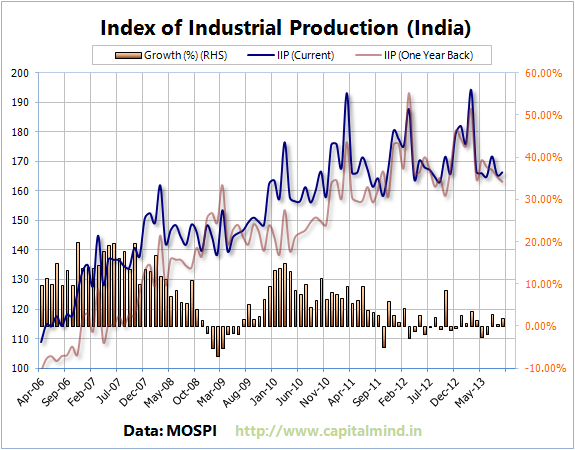 However the numbers are better due to a lower base in September last year, as you can see from the chart above. A warning appears – October 2012 had the best IIP headline number which has later been revised upwards. So when we get IIP

Looking at the components, we see an improvement in all parts: 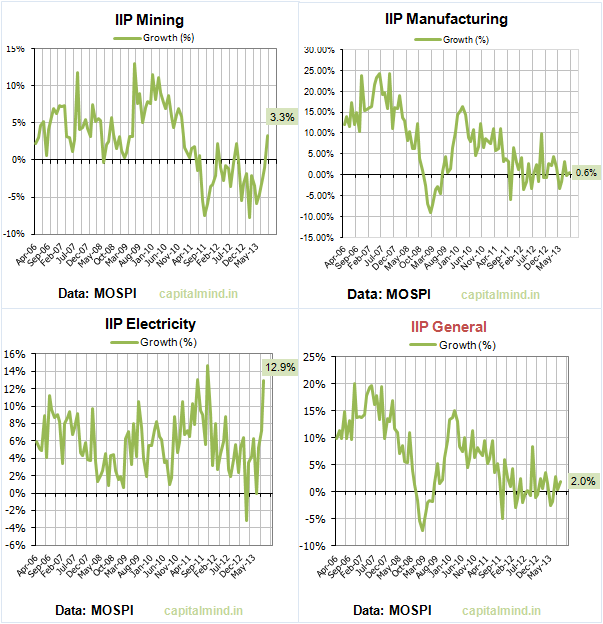 However the biggest weight is for Manufacturing (75%), versus electricity(10%) and Mining (15%) – so a very low growth in Manufacturing (only 0.6% higher than last year) has brought the growth in the index down to just 2%. But the electricity bump up might again not be sustainable – past spikes have not moved growth high, as you can see above.

And then, going to the use-based indexes, the deal is There’s been an increase in basic goods, but capital goods production has gone back into negative mode. Consumer durables has remained flat, with a big decrease in Consumer Durables (-10%) offset by a spike in Consumer Non-Durables (+11%).

Overall the numbers might look okay, but the problem is the low manufacturing number of 0.6%. Seasonality might be in place here, with Diwali in November; production increases will be in October (last year the manufacturing index spiked from 174 in Sep to 182 in Oct). October might be the differentiator.

Impact: Not very exciting if you ignore the spike in Electricity (which contributed about 1.2% of the 2% increase). Electricity is likely to be evened out in October (production in Oct 2012 was very big and we are highly unlikely to beat that by 12%). 2% is not an impressive number by any standard, so it’s quite unlikely markets will find this hugely attractive.