The RBI Housing Price Index for April-June 2013 is out. Well, sort of. In the quarterly macroeconomic development paper, they’ve released the Housing Price Index (HPI) details, but not the actual numbers (only QoQ and YoY growth rates). Additionally,they’ve changed the “base year” to 2010-11, from the earlier base of March 2009. And, they’ve not published transaction details for two quarters now.

I’ve decided to use their “Quarter on Quarter” growth rates, on the index last released, and we have some kind of continuous graphs for you. First, the HPI as a composite index, with its Year on Year Growth. 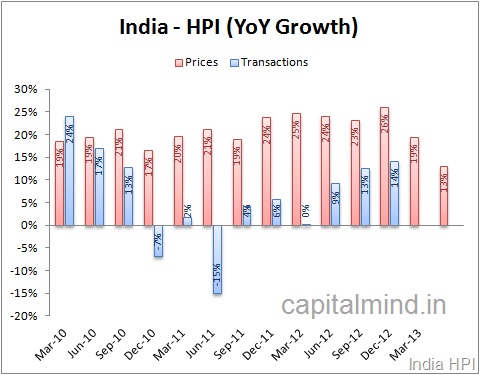 This is lower than the previous noted number of 19%, and the lowest growth since 2009. Are home prices reaching a plateau? I believe given the trajectory of interest rates, the high unsold inventory (only anecdotal, not enough data to back this up) and the relative slowdown in the economy, home price increases must come down.

But for prices to actually turn negative, India-wide, it might take a longer and deeper recession. People are sitting on insane price increases, with prices going up 113% since March 2009 (composite HPI). 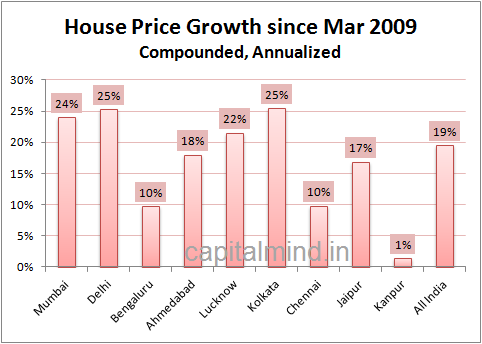 The metros of Mumbai, Delhi and Kolkata have been much higher than the average Indian growth number of 19%. Bengaluru and Chennai have lagged behind as price corrections in these cities are getting more and more visible. Kanpur is some kind of outlier that raises questions about the data itself (why only 1% when Lucknow, the closest city to it, is at 22% compounded?)

Delhi grew at a scorching 20% (year on year) but that was still lower than the much-more-scorching 33% and 40%+ growth in recent years.

Mumbai seems to have mellowed down, with just 8% growth.

Bangalore and Chennai Remain Under Control

With single digit year-on-year price increases since December 2012, Bangalore seems to be under control.

Chennai on the other hand was showing signs of prices going back up big time, with a couple of 20%+ quarters. But that’s now down to 11%.

There’s no sign of a recession anywhere in the big capitals of UP and WB, where prices went up 28% from last year.

And lets not attribute this one to Modi please. Because Mulayam Singh Yadav wants to point you to Lucknow and Sheila Dixit to Delhi and then we’ll never see the end of it.

While the rest of the country is buying property hand over fist, Kanpur seems to have developed allergies. 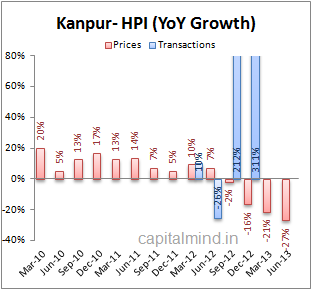 While in general prices seem to be coming down, the 13% annual growth is still too high (inflation’s at 9-10%). Shares of real estate companies remain at low levels, perhaps anticipating further carnage. Real estate is a levered asset, so it is interest rate sensitive, and rates have been going up.

If the west is anything to go by, our bubble is in the process of bursting and we’re going to be in for a hard landing. Perhaps not as hard, because Indians in general have more equity in their houses and banks have recourse to their other assets (if the house price doesn’t make up for the loan). But we are going to see zombie housing enclaves from investors unable to sell up, incomplete projects from developers unable to get financing, and distress pricing in exterior parts of each city. But don’t hold your breath, this stuff can take years.