Happy Diwali! I hope you all have a prosperous year ahead. In the seventh series of the Capital Mind Diwali Predictions, I bring to you my predictions for the next year, see what I’d said the previous year and wonder what I was smoking. (Insert Statutory Warning that tobacco is the most terrible, disgusting thing you can do to yourself)

What Happened in the Last Year

1. The Rupee fell to Rs. 68 and recovered to near Rs. 62 to a dollar. This has been a horrendous year for the rupee.

2. The market was volatile but at Diwali was at or near all-time highs. 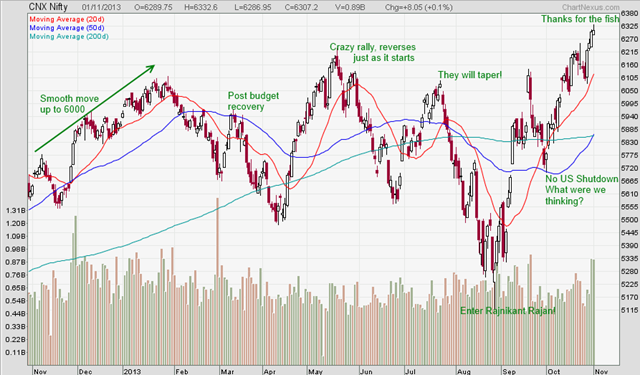 3. The entry of Raghuram Rajan and some monetary measures saw very volatile bond markets. Bond yields have gone berserk, with short term yields touching 11% after July’s crazy rupee move and the subsequent checking of volatility by raising MSF rates to 10.25%. Interest rates however have been recalibrated as the rupee has stabilized temporarily around 62.

4. Inflation remains high, with CPI inflation still above 9%, and WPI inching upwards. The rupee depreciation is yet to seep into the system. Monetary policy is still lax, with ample liquidity and an increase of 18% in bank credit, and over 12% on the M3 money supply.

5. Growth is weak, the latest quarter had a 4% print and IIP and PMI show no sustained manufacturing activity.

6. FIIs got back in the act in September, but have been continuously selling debt in October. The foreign investor has driven the most recent rally, as the retail investor is largely absent. Midcaps have lagged behind, and aren’t close to a new yearly high or an all time high.

What I had said:

Defaults and slowing credit growth will hurt bank profits. I believe it will impact bank stocks as well, but after seeing violent reactions such as the Fed’s QEs or the ECB/JCB action, I can’t say that the RBI won’t jump to benefit its beloved banks (rather than encouraging new banks and letting the old ones go)

I was wrong and right. Defaults have happened and hurt public sector bank profits, but the private sector is still flying high. The RBI first made things difficult for banks and later came to the rescue by providing lots of liquidity and allowing longer term depreciation of the losses due to bond yields rising. But a big default like NSEL didn’t change much.

I’m going on a lark here. Indian stock markets will crash. We might make an intermediate high (say 6,300+ on the Nifty) but I think we crash at some time next year. The trigger, this time, is likely to be internal – such as another silly government program, or large deficits, or the dollar-rupee equation hurting big time. (As compared to external such as a Greek default)

-1 on this. There was no crash, unless you consider the US taper led fall, which WAS an external event. The silly government program – the Food Security Bill – didn’t hurt the markets much.

+1 – it did hit a new high in rupees last November/December. Then it crashed. And today it remains near all time highs due to the depreciation in the rupee.

Some stocks will go up more than 100% in the year. These, I hope, I will catch for at least part of the way.

Of course a few did: 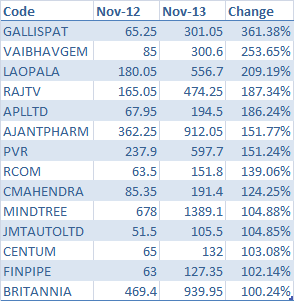 I wasn’t on many of them – sawa a bit of FinPipe, RCOM and Alembic (APLLTD). Missed the Mindtree and Britannia moves. But the prediction was easy and correct, so +1.

India will see job losses in sectors like IT and telecom and BPO and such. The impact will be felt beyond a year, perhaps, but the ball will start to roll and create both political and economic complications.

This has happened but has been small to date. No points.

The US will get over the "fiscal cliff" but there will be other issues that continue to plague it, with political uncertaintly and the Western economies will start creating walls to keep jobs within their countries, to work through recessions.

We saw a US shutdown, a debt limit fight, a potential taper…so yes, there was uncertaintly. Creating walls for jobs is continuous, with more controls over foreign pharma (US FDA), more attempts to keep jobs in the US (JOBS act), visa restrictions (UK) and much more. So yes, +1.

At a personal level, I’ll figure out things on the work front. I might transition into full time employment. Or, I might get back into creating a startup in the financial space again. A lot depends on how secure I can make my family’s future, a position I intend to address in the next 12 months.

Things have changed. I’ve decided to do the startup, and it will be called Capital Mind. No points, as this was hardly a prediction.

And finally, I’ll only buy stocks or short them after appropriate research. The last year has been very very indisciplined. More details on the site as things get clearer.

I’ve moved into seriously disciplined trading, based on data, deep analysis and so on. The moves haven’t gone to the website yet though, but you can see part of them in the technical posts I’ve been making.

What will happen next year?

Yes, I know these are weaselling predictions. Why can’t I just tell you a stock that will appreciate 100% in the next year? Well, I’ll leave that to the well dressed folks on TV. Happy Diwali folks!