India’s forex reserves haven’t gone too far up, despite all the good things that seem to have been happening recently. RBI’s consistent selling of dollars seems to have restrained the inflows from NRIs’ (FCNR Swaps) which have supposedly brought in $18 billion since September 4, when the swap was announced.

Overall reserves went up $7.7 billion, from $246.7 bn on September 2 to $254.4 bn as of November 8. Which means the remaining $10 billion (out of $18 bn incoming) was sold – either to oil refining companies (who were told to buy dollars from the RBI) or in the market (as part of mad-market-invention by RBI).

But this, in the overall context of the 10% depreciation of the rupee is probably not that much of an increase. We are way below highs, and the recent move up must be seen in a historical context: 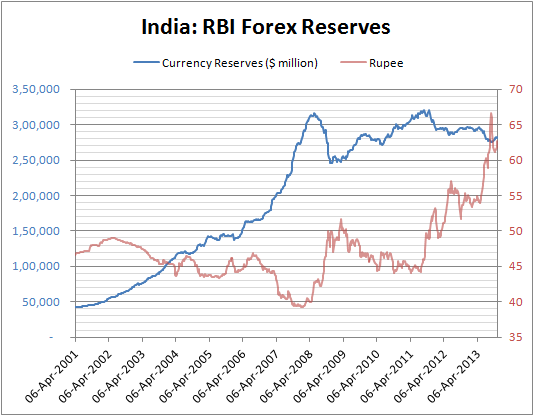 The situation since August shows that while we’ve upped reserves, the rupee has been less enthusiastic: 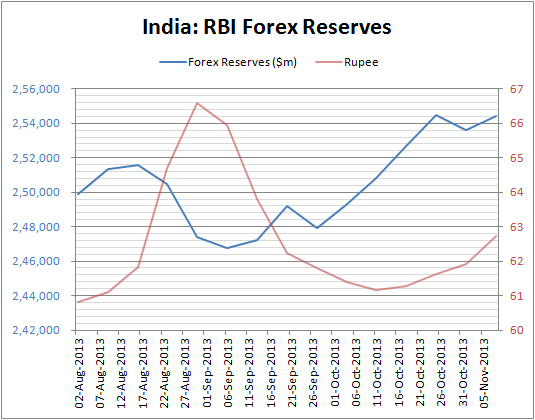 The Rupee’s Gone Back Up

Meanwhile, the Janet Yellen announcement that people can feast on cheap money for much longer, has caused a huge reversal, with the rupee rising from the Rs. 63.75 it had reached last wednesday, to Rs. 62.42 today. Yes, we’d like to believe this is about India’s “fundamentals”, but honestly, no.

Now RBI Governor Rajan had told us recently that the oil company dollar demand – which is $8 to $10 bn a month, was being brought back to the market. From August 28, they had been told to directly take dollars from the RBI (using rupee-dollar swaps), but it seems like they bought from the market in early November. Just that was enough to take the dollar back up.

It’s entirely likely that the RBI has asked OMCs to stop their market buying and again, buy directly from the RBI. This will take out demand from the market, which means the dollar should go up – the abrupt upmove suggests the move. Why should RBI be telling market participants what to do? This is another name for rigging.

This is no longer about transparency, it’s about manipulating our minds. If we can just “think” that the OMCs are buying on the market, but in reality they aren’t, then maybe the dollar will go up. And while it has worked in the short term, thanks also to Ms. Yellen, it is unlikely to stay that way for too long.