Franklin Templeton postulates that “History favours a return to the mean” in which they say that we are, based on historical data, substantially more likely to have  positive returns in the stock markets in the longer term. In absolute (“nominal terms”) they bring you this graph: 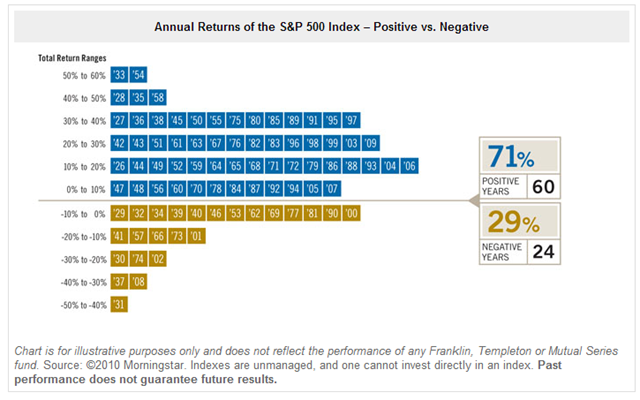 I was skeptical, so I decided to get data from Robert Schiller’s (excellent) web site, where he has data on the S&P 500 since 1971, with inflation indexes and “Inflation adjusted S&P values” till October 2013.

Let’s take “real” annual returns. This is the return that are higher than recorded CPI inflation (or if you want the technical details- YoY growth of the inflation indexed S&P values). The picture is good, but not that good.

and then Franklin Templeton tells you that 10 year returns are mostly positive. This is based on the index – that you will end up positive most of the time, they say: And yet, I’m skeptical. What would it be like if we considered inflation? We would also have to consider dividends.

Let’s do a run. The “real” price in Schiller’s data is effectively the S&P adjusted to today’s dollars, as are the “real” dividends. Let’s assume we invested $1000 of today’s dollars in 1925 (December) and every year, we would collect dividends and reinvest them in the index.

How does this, a more realistic version, look on a chart? Instead of just positive and negative, I’ll draw a line chart of historical, inflation-adjusted, dividend reinvested retun: 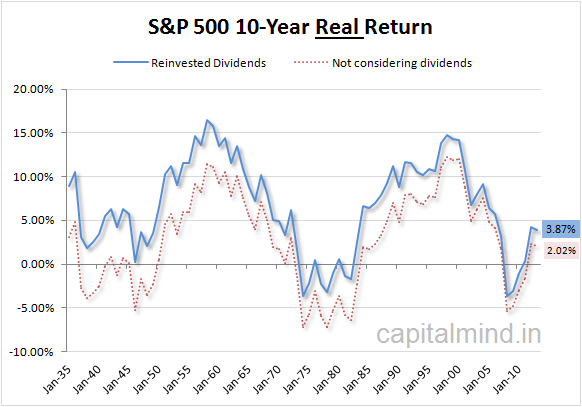 Yes, the S&P is roughly above most times, considering 10 year returns including dividends, even after inflation. There are about 10 instances of negative 10 year returns, mostly in the 70s (an era of high inflation) and in the 2008-2010 period.

Incredibly, with dividends reinvested, $1,000 of today’s money (equivalent) grows more than 283 times since 1925. That’s not a bad return at all.

What’s interesting is also the argument of whether you should have gone for a fixed income product or not. Let’s say you had a choice, 10 years ago, of whether to have invested in the S&P 500, or a 10-year bond. Now let’s ignore the risk of reinvesting interest on the bonds, and ignore the dividends on stocks. How have returns panned out (note: this is not inflation adjusted – both cases are nominal) 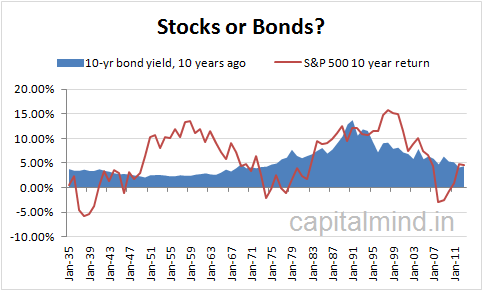 Like the real return up above, this graph tells you that buying stocks versus bonds goes in a cycle. The 60s would have been good to buy bonds in (the return in the 70s is better than stocks).

Bonds beat stocks from 2008 to 2011, and since 2012, stocks have marginally trumped bonds. I expect that with bond rates so low today (Less than 3%) stocks are likely to outperform bonds for the next 10 years. That might get even better with dividends reinvested.

If you want the data, I’ll upload it as a Google spreadsheet. Would love to hear if I’m wrong or have miscalculated.

Note: for India, we don’t have such long term return charts or dividend data. I have a graph of returns since 2000, adjusted for Inflation. 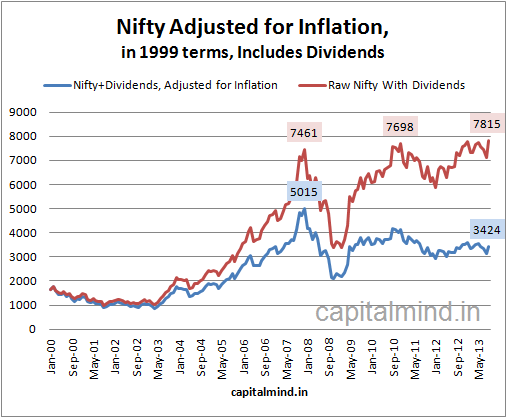