The Technical Setup (Bollinger Reject + MACD) has now worked its magic with Tata Steel, after nearly hitting its stop loss: 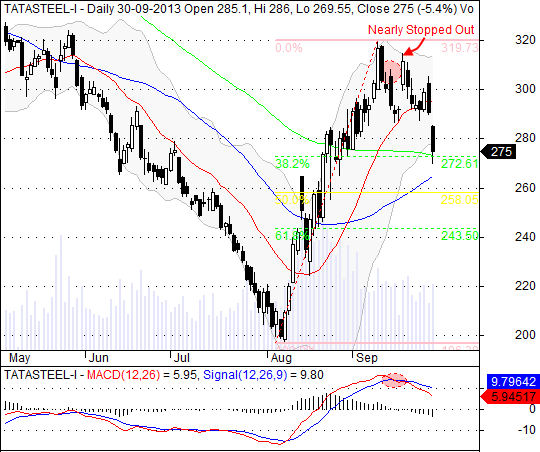 For the sake of the system, this trade is complete, at the lower Bollinger band. At 275 (and including a futures rollover last thursday) this trade has yielded about 6%. (in 12 days)

I however see an opportunity in the stock straddling the lower bollinger band at least for a couple days and believe that a more likely target could be 260. So I’ve written a 270 put at Rs. 14, which gives me an upside cushion but maximises further gains to only Rs. 14 (which is another 5%).

The other trade, TCS, was not a direct short, it wasn’t something that fit into the system. However the call was to write the 2000 call at Rs. 29, and that expired worthless: Again, I don’t like systems that don’t have losing trades. So I’d be very careful trading this system based on just 7 trades that have all worked out.

Here’s another, and I think this is a strategy that might hit a stop very soon, in Sesa Goa: 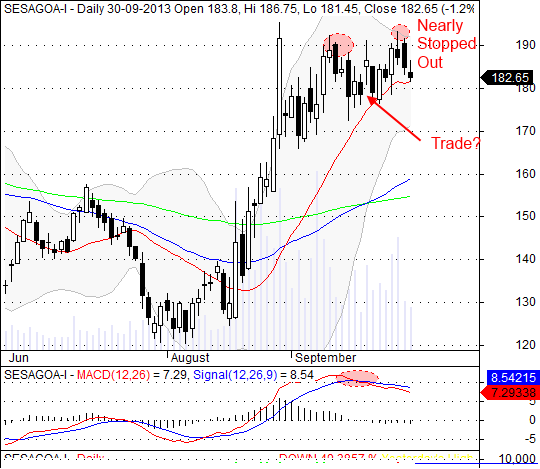 While I haven’t taken this trade, it seemed interesting at the time. I mentioned it on twitter as well. But I’ll put it in the system – and I’m wondering if this is the trade that loses money!

Note: Big discretionary element. You can bet your right toenail I will not reveal a system that is possible to fully automate.