ITC and RCOM show interesting entries (both short) in the MACD+Bollinger Reject Trades. This is a strategy with a number of winning recent trades, and follows a discretionary pattern recognition system where the upper or lower bollinger band is traversed, and moved away while there is a MACD crossover. (Ignore this if you don’t understand technical terms). 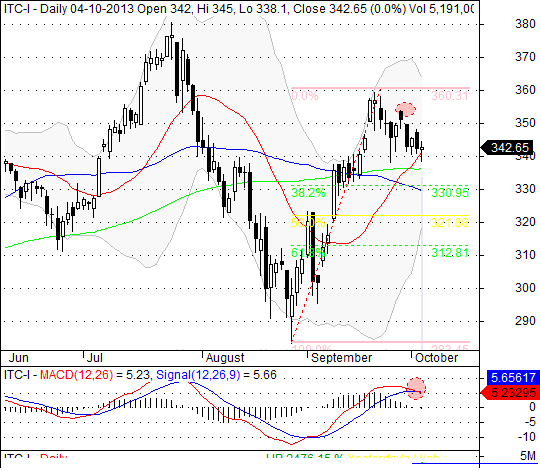 ITC seems like it will move towards the 330 mark. There’s a fairly large stop here, but I’d keep it near the last reject (353). There is a strong chance of a bounce off the 20 DMA, so care has to be taken.

RCOM too shows a good sign of breaking down: 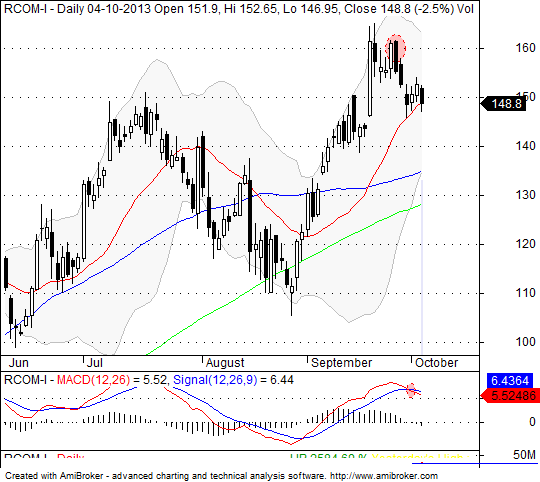 RCom’s charts probably triggered a couple days back. However, the move to 20DMA was today. I might go with put options on this, as the lot size is 4,000 and the risk is about Rs. 13, which means a potential loss of Rs. 52,000 per lot (for a future) – not something that fits in well with my strategy parameters.

I had mentioned Sesa Goa too, and strangely that remains open (note: I’m not trading this one): 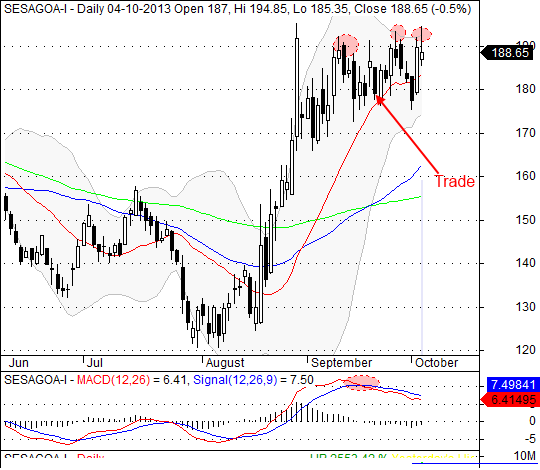 This one is likely to go to the stop loss. A close above 191 would hit the stop loss. However it hasn’t hit it yet, and I expect this to be a fairly large loss-making move (at 191 it would be -7%).

In my last post I mentioned I would continue with the TataSteel short despite the strategy having given an exit, to see if there is a useful traverse of the lower band. Wrong move there, as the stock recovered quickly. I exited at 287, exiting the option at 7 (which I sold for Rs. 14). The profit shrunk to 13 points from 22, which is a profit of 3% instead of 6%. However, this is off-strategy so it goes into my testing book.