It turns out – and we only know two months later – that RBI has been selling dollars big time. $6.77 billion dollars have been sold, with more than $4.3bn being forward sales. Remember that RBI sold $6bn in July 2013, though in the recent months the RBI has been a buyer in the dollar forward market (blue bars below). August 2013 has been the biggest forward sale since June 2012. 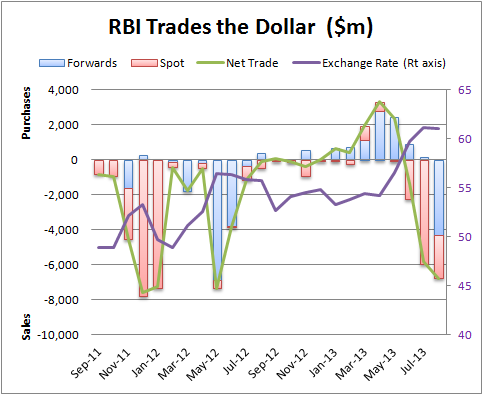 Despite such selling, the dollar went its way up. It has since fallen substantially, with the dollar closing today at 61.07, the lowest in a while.

RBI Forex Reserves in July/August fell in the same period: 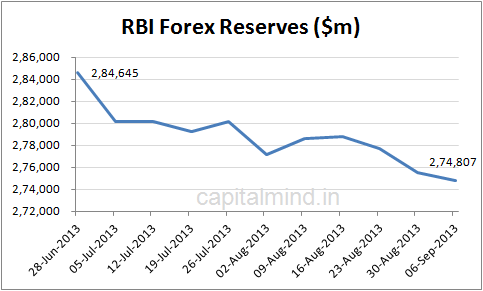 I would imagine that with the FCNR swap and other steps taken, the RBI reserves would have gone up a bit, but the latest is just at $277 billion. Which means dollar sales have probably continued, in order to support the market.

This is noteworthy, because the selling of dollars takes out rupees from the system, squeezing liquidity. Liquidity was tight till mid-September and has since been eased, but the recent steps of introducing 7 day repos was probably due to further dollar selling by the RBI (to balance out the liquidity).