The Reserve Bank of India has made an interim announcement to cut the marginal rate to 9% from 9.5%, effectively lowering bank costs of funding.

Since Repo borrowing was limited to 0.5% of Net Demand and Time Liabilities (NTDL) – which is the sum total of the deposits banks have – banks had to borrow the excess through the Marginal Standing Facility.

Today it’s down to 9%. The market hasn’t really reacted, since it cannot. These measures have been announced after equity, debt and currency markets are closed.

We can treat this as a drop in rates. However, MSF borrowing has been falling suddenly after the spike on Sep 30: 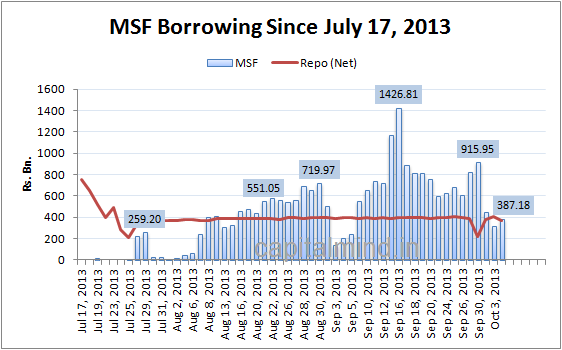 Effectively, the drop has brought it to substantially lower levels, so liquidity pressures have eased. It’s not apparent, however, why the RBI chose to call this easing liquidity – because liquidity is much easier than earlier already.

In a new twist, repo – which is money borrowed from RBI overnight (or 3 days on weekends) – there will now be 7 and 14 day repo borrowing. The extension will give banks a clearer picture on how much interest they pay for a longer time, and also increase the quantum of borrowing to another 0.25% of NDTL. (Currently overnight repo is limited to 0.5% of NDTL)

The statement is that RBI will:

Provide additional liquidity through term repos of 7-day and 14-day tenor for a notified amount equivalent to 0.25 per cent of net demand and time liabilities (NDTL) of the banking system through variable rate auctions on every Friday beginning October 11, 2013. The notified amount and tenor of the term repo auctions will be announced prior to the dates of the auctions.

What we don’t know is the rate at which these repo will be given. I assume that they will be similar to the MSF rate, so around 9% is what I expect.

For the trader, this is not a great time to be short. But if I were to read between the lines, the RBI seems to be preparing for a really bad announcement or move in the days to come. I would stay nimble. (Disclosure: long banks).