The RBI has announced that it has collected a phenomenal $10 billion through the FCNR dollar swap arrangement.

Has this helped our forex reserves? Obviously it should, since forex reserves will be augmented. Banks sell the dollars to the RBI for rupees (at 3.5% p.a.) and the dollars sit on the RBI balance sheet until the swap is unwound (a minimum of three years). 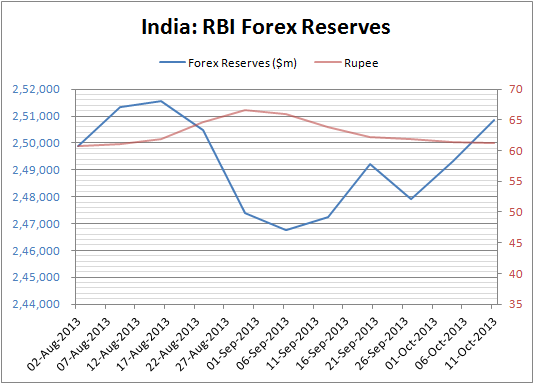 Has this helped the dollar? Or course it seems to have. This doesn’t make a heck of a lot of sense – how can the dollar exchange rate be impacted when the dollars coming in are being bought directly by the RBI? The dollars that are being sold should somehow hit a market – where there will be more selling pressure than buying pressure, which thus brings the price down.  (Currently the swap works on the RBI reference rate, which is a once-a-day poll by the RBI and is fixed for the day)

You can also see above that the reserves have increased only by $4 billion, from $247 to $251 billion. But they got $10 billion through the FCNR route  – in fact they already had $5bn on Oct 4, as per Rajan. That means the RBI must have sold the remaining dollars in the market.

The dollar rate has fallen, and that’s a good thing. However, it’s not because of the FCNR borrowing. It has just helped the RBI keep the reserve steady while they sold like crazy in the real market to protect the rupee – at least, that’s what it seems from the above data. RBI has also sold dollars directly to OMCs through another swap, which confuses the whole issue somewhat.

I hope there will be more data about all of these going forward – how much do we have to return in the FCNR swaps, how much through the OMC swaps, and when, etc.

The Downsides: You’re going to live at least three years longer, you think? Then three years later, it’s time to return this money, and we better hope we have our act together by then. Because then – and this is Sep-Nov 2016 – we will have to remove Rs. 50,000 cr. from the system, which can contract liquidity. But importantly, that many dollars go out of RBI reserves – and therefore sets up a schedule for yet another weak point for the currency.

We must absolutely make the Indian rupee freely convertible by then.

The other downside is inflation. $10 billion is 60,000 crores of rupees added to the system, minus whatever RBI has bought by selling dollars directly. Even if that’s $4 billion, that much more money is coming into the system today. Inflation is already high, and this new “reserve” money will hit the system within a few months and cause serious inflation.