After that was another great fall, plonking the stock down to the Rs. 18.7. The earnings have doubled to about Rs. 2 per share, so this is a P/E of less than 10.

The company will spend Rs. 2367 crores on the buyback. 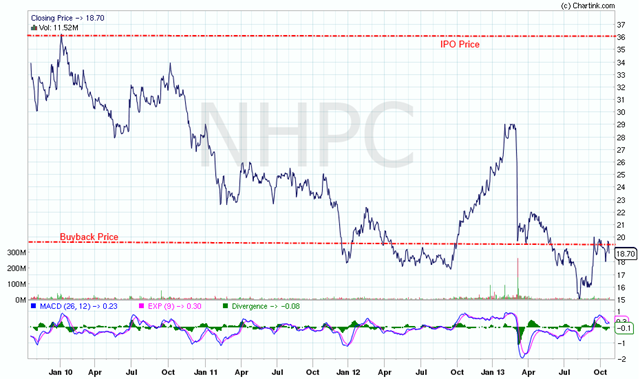 Why are they doing this? The company could instead have paid dividends. A tender offer will be proportionate – everyone who submits shares will get at least some of them bought back, in proportion to all the shares offered. If 200 shares are to be bought and 1000 shares are offered, they will buy back 1/5th of what each person offered.

Many people don’t bother and will leave the shares in their accounts. This gives the rest of the submitters a slight edge. With the stock price so close to the tender price, many might not be incentivised to offer, so what’s the deal?

The Government Wants the Cash and Will Cut Holding

They have a lot of cash on their books. Their biggest owner is the government, which holds 86% of the shares. This has to be brought down to 75%, but the government can’t easily sell their shares in the market (just the news it will take the stock down big .) The recent institutional placements of shares (ONGC, NTPC etc.) have resulted in deep mistrust of the government since those stocks haven’t performed well since.

Therefore, one way to get to the cash that NHPC holds is to do a tender offer. If the government submits all its shares, it will see a buy back of at least 8.6% shareholding (as the buyback is 10% of total capital).

This will not help in bringing government shareholding down to 75%. Since the price is so low, we can assume that no one else will tender their shares. (LIC holds 2% and they are unlikely to tender)

If no one else subscribes, then the government gets to sell 10%, which will bring their stake down from 86 out of 100 shares, to 76 out of 90 shares, which is still 84%.They’ll still need to figure out how to sell the rest to other people so that their holding comes down.

Some might say this is unfair – the IPO four years ago was at 36, and the buy back is at about half that? But this is how markets are. No one forced you to buy, and no one should bail you out if you took that risk.

And by the way, no one’s forcing you to sell either; The EPS will go up about 10% (lesser shares to distribute profits) and the P/E will be around 9. This stock has a huge government influence which is a negative.

If the government has to sell to make the 75% limit, the shares are likely to see more damage, though temporary. But honestly, this isn’t such a bad company, so it might be worth a dekho at a reasonable price. I’ll leave the valuation to better people, but you have to note that nearly all government companies are cheap, so this has to be judged as a relative bet.