(First, an intro. Kewal Kiran makes Killer Jeans. This is an interesting business, priced at Rs. 806. They make around Rs. 43 per share, 52 cr. PAT and 315 cr. revenue. This is a post just to archive the comment)

Interesting company, but would you really pay 20x (this should be 15x) P/E after cash for what has been stagnating earnings? PAT grew only marginally in the last year. But Q1 has been decent, and sales have come mostly from growth in Killer Sales + Exports.

Red flags: They seems to have a joint venture (33% owned by KKCL) in White Knitwears, which seems to be rest-owned by the promoters themselves. This is a classic red flag, why is the company joint-owning a garment company, which is in the same business, along with promoters? Siphoning mechanism. Already have provisioned for 49 lakh loss.

Also that they close so many stores is scary. From my calcs they closed 7 k-lounges, 1 K-Lounge for her, 2 killer EBOs, 3 Integriti EBO and 1 LawmanPg3 EBO for a total of 14 (this is subtracting what they had stated from their annual report from current report at http://www.kewalkiran.com/PDF’s/Analyst%20Presentation%20Q1%20FY2013-14.pdf for Q1 2014). A k-lounge – the biggest beast – has a massive 40 lakh investment. This is not something you close just like that; and most of these are franchisee owned. Even last year, 47 out of 250 stores were closed – nearly 20%. It’s a red flag for sure.

In comparison, EBO (Exclusive Business Outlet) numbers for Page Industries show 71 stores in 2012 and 100 in 2013, for a net addition of 29 stores, and Relaxo added 19 to go to 168. They don’t give you closure information though.

But yeah, theres the fact that nearly 85% is locked out of themarkets – nalanda’s 10% and promoter 75%. So you will get some scarcity premium and if the company cuts prices to the sub 800 rupee level MRP it will do really well. Charts look interesting if it crosses 900 convincingly. 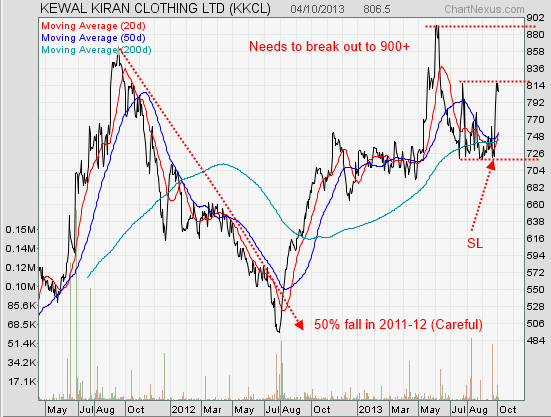