The first 7 day repo auction as noted in the recent announcement for liquidity easing will be held tomorrow (Oct 11, 2013).

The repo terms have also been announced. Remember, this repo auction will only be between banks, and will be for a separate 0.25% of NDTL (around 20,000 crore rupees, or 200 billion rupees).

The concept is just the same as overnight repo. Just that the rate is an auction instead of a fixed one. Banks can’t bid below the repo rate, and they will not bid above the MSF rate (which they can borrow at MSF) I thought bids might come around the MSF rate (of 9%) but people think banks will bid around the repo rate – after all, no one else can participate, so why pay more?

The auction is from 2:30 pm to 3:00 pm, so it sits between the overnight auction (mornings) and the MSF (4:30 pm). This gives banks an additional window to borrow.

There is no bank-wise individual limit. Any bank can borrow as much as it wants (as long at it has excess SLR securities – repo is backed by only that collateral). Basically, the 0.25% of NDTL is not on a per-bank basis, unlike the overnight repo. 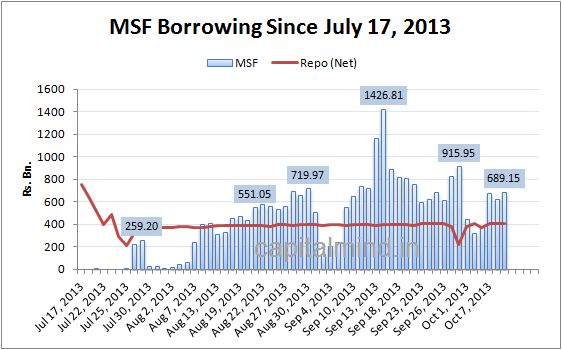 Tomorrow, there is a 15,000 cr. auction of government securities. Yields are at 8.48% on the 10 year. The 7-day repo should make the government auction easier, since there’s liquidity for the taking. Thus, underwriting auctions have gone for less than 10 bps (0.10%). The implicit assumption is that there will be no devolvement.