In a conversation with @eyeofsiva and @rajivanand on twitter today, there was a discussion about cash in the system:

@deepakshenoy second half of the yr is always tight. Currency leakage happens. More so this yr with elections.

India typically sees a high growth in the currency numbers, with year on year growth as high as 24% in 2008. (We’ve seen higher figures earlier but let’s ignore that for now). 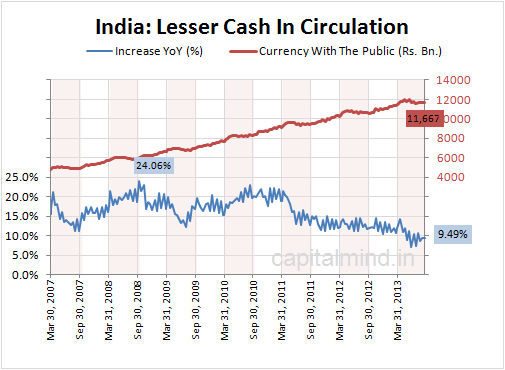 Growth though has been dropping. From 2011, the year-on-year growth of currency notes with the public has fallen to 9.5%. Even in absolute terms, like Siva says above, thenumber has flattened.

And, like Rajiv says, we seem to see flattish growth in the first half of the year (pink background) and rising cash in the last half.

I wonder if the pattern repeats going forward.