A quick post on the short term move of the dollar. We are down to just below 62, which is about 10% lower than the recent high, now at levels we last saw in early August. 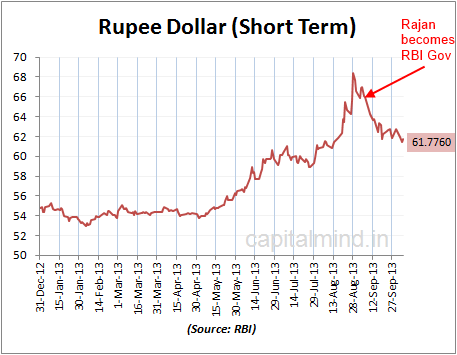 Rajan has had his impact. Yet, will that continue? He’s raised the repo rate, brought down the MSF rate, massively increased FCNR borrowing, reduced the swap rate for banks for forex borrowing by them, and removed the 0% EMI (the last one has very little to do with the dollar).

In addition, SEBI has made it SLIGHTLY easier for FIIs to operate, with a single registration for investments, and the ability to buy debt as long as limits are available.

While this is a good reprieve, there are serious headwinds. India is seeing high inflation, and rates are likely to remain high despite these recent quasi cuts by the RBI. Our imports still are much higher than exports, and we’re not really cutting crude imports (our biggest). Maybe some gold, but that’s temporary, and gold will be smuggled in anyhow. The economy is slowing and we are in a housing slowdown of the scale we haven’t seen before.

We still depend on fund flows. As long as money keeps coming, we’re fine; but this tap is likely to slow down very quickly, as we’ve seen earlier this year.