I have monthly Sensex data since 1978 (the early part of it was reconstructed, since the Sensex only came to being in the mid-80s). So if you invested in the Sensex every month, how would your returns be?

Since you can have different starting dates, I’ve made the simple assumption that what matters is “rolling” returns. That is, today, your metric would be – what would the Sensex return be if I had invested every month for three years (since Oct 2010), for five years (since Oct 2008) and so on. 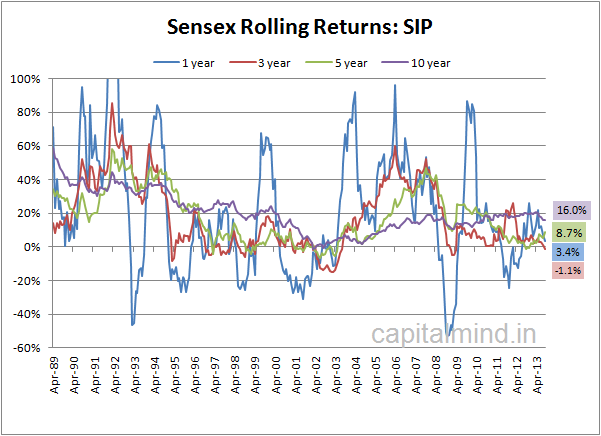 (Source: BSE and my own calculations)

Note that all returns are annualized and use the excel “RATE” formula that assumes the same amount invested every month.

But this obviously has flaws. Firstly the data before 1989 (at least for the 10 year) is suspect, because if the Sensex was devised in 1986, how would you know what stocks to have bought in 1989?

Let’s then assume, for convenience sake, that you started an investment journey in 1990. How would your returns be? And let’s look longer term – the 1 year return is extremely volatile and we’ve matured to a point that we understand 1 year is not long term enough. 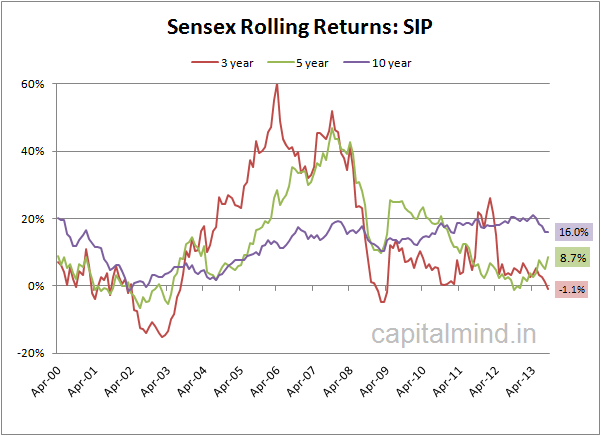 The three year SIP return, today, is a negative return. In absolute terms, you would have less, after three years, than you had invested since Sep 2010, if you invested a common amount monthly.

Remember, this chart is not adjusted for inflation.

Even the five year return – at +8.7% – does not quite make the inflation return.

When you think really long term like 10 years, your salaries have changed dramatically. So you can’t invest the same amount over time.

So let’s assume you start investing Rs. 1,000 a month and you increase the monthly investment by 10% per year. You will now be investing around 9,000 rupees every month. What would your returns look like?

Let’s also add another asset class: Gold. And then, compare it the the “discounted” value of your total investment – meaning a growing line showing a 10% per year return. Instead of percentages, we’ll look at actual figures. 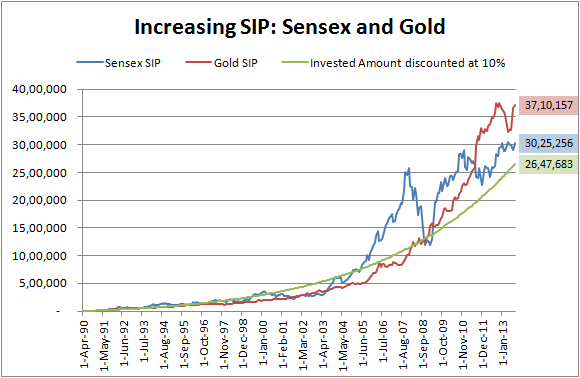 The amount invested, at a growth of 10%, becomes Rs. 26.5 lakh (2.65 million), over the last 23 years. Ignore what the absolute amount was – it is irrelevant because purchasing power was different. The 10% a year number is the same as your increase in SIP every year, so it’s a relatively useful estimate.

Investing in the Sensex has dipped below your “cost” (that is, if you assumed 10% return was your bare minimum, a fact in the 90s) at least twice – in the 2001-2003 period, and then briefly in 2008. Even now, the premium of the Sensex over the discounted growth in the cash invested, is not very attractive.

Gold has done phenomenally since 2010.

It is a much more difficult exercise to find out rolling returns in such a scenario. (I have to write a program to do this) But that would tells us how doing an “increasing” SIP would have done, at any point in the last 10 years, and thus, where we stand now relatively.

Impact: Some may choose to view this as the lower point for the sensex which has to catch up to the “mean”. Others may say, okay, the 10 year rolling SIP return is still great – why not keep that as a longer term measure.

And yet others will say, this next decade is the time for gold.

I don’t wish to draw conclusions. Except that purely indexed equity returns may not be as attractive as one thinks, even in the ultra-long term.