India’s foreign exchange reserves have been through wild rides recently. But if you look at the reserves since 2001, here’s where we went. There are three distinct phases. 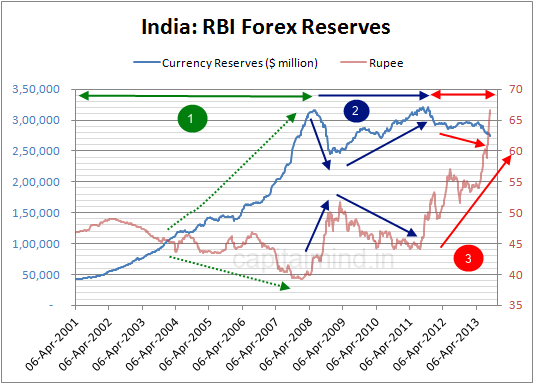 India built a massive forex reserve chest. We went all the way to 300 billion. Remember that buying currency at this obscene quantity would have required printing of a lot of rupees. Some of those rupees were kept as “MSS” or a Market Stabilization Scheme where the rupees were taken by the RBI and the government paid some interest on them. This was temporary sterilization which ensured there was less inflation then,but obviously those rupees would come back into the system someday, and cause inflation. (They have, and inflation is here now).

This was the period of extremely cheap money in the US. We effectively financed that cheap money, by buying US treasuries along with other economies. (Most of those other economies, though, were net exporters. We weren’t.)

Even with such massive buying of the dollar, mainly done to build reserves and keep the rupee from appreciating too much, the rupee DID appreciate, from Rs. 46 to about Rs. 39 to a dollar.

My view: We shouldn’t have bought this much. We flooded our market with rupees. In fact from 2006, We should have let the rupee go up much more – say to 25 – and then we would have corrected to better levels. Eventually this has come to haunt us.

India then saw what a crisis really meant. With the Lehman crisis, the RBI had to resort to selling its precious reserves, and we saw the rupee hit 50.

Then, as the US did multiple rounds of quantitative easing, India saw the dollars come back, and by 2011, we had seen the rupee back at the 45 level.

Incredibly, even after the Lehman crisis, we continued to buy dollars. I believe if the RBI stopped its purchases, we would have gone all the way down to 40, and again, the course correction would have been smarter and shorter.

My views: This was the time we could have opened up the rupee to capital convertibility. We already had the volatility, and countries were iffy about the dollar. India’s growth was strong even if you considered the temporary drop. We should have allowed trade with our partners in the rupee, and for them to hold rupees as a convertible currency. We didn’t. So we’ll have to do it in the worst time ever, in a crisis that will appear in Phase 3.

From mid-2011, India has seen a consistent and continuing exodus of foreign investors. First, this was due to a fear of extreme corruption and inaction. That took the rupee to 55.And in 2013, the fear of a US “taper” showed you what the underlying situation really was – we depended on fund flows to finance our “net import” situation.

Note: I haven’t mapped the recent turnaround from 66 to 63.

The RBI has been selling dollars, but not nearly at the pace it was buying earlier. You can see the steady slope of the recent downmove in the reserves, versus the steep upslope in the 2006-07 area. The feeling that we need reserves no matter what, is a fear that drives the slow selling. However, even with that selling, we have seen the rupee drop more than 40%.

(I know some people think this is wrong semantics and it should be a different percentage, but I don’t care. For me, the dollar denominated stuff costs 40% more, so that’s the number we care about)

The Distribution of Reserves 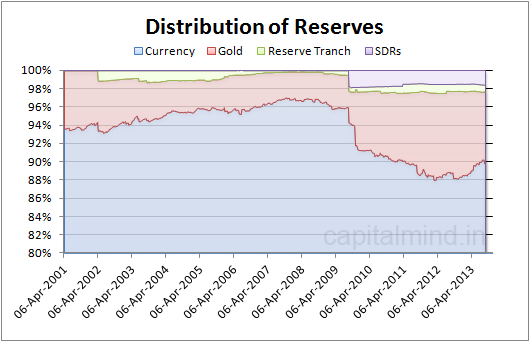 Indian forex reserves are mostly in USD, and there’s some Yen, Euro and Pounds. These form the currency portion which is between 88% and 96% of our forex reserves.

We increased the amount of gold in 2009 when we bought 200 tonnes from the IMF, and the increasing value of gold (in dollars) made that position larger. However, with the recent fall in gold prices (in $) we have seen that proportion dip.

We also have a small amount of Special Drawing Rights (SDRs) and  a Reserve Tranch Position in the IMF.

Reserves as of September 6 were $274 billion, the lowest in three years. We don’t know what has happened in the last week (to Sep 13) when the rupee has gone back up to 63. We’ll find out next week!

I don’t really believe in the concept of measuring reserves as “import cover”, so I won’t go there. But I am kind of happy we are losing reserves rapidly, because it will facilitate the move to a freer rupee.

In the next two years, if we see more dollar outflows we are likely to see the rupee depreciate more, and the RBI will likely sell more dollars. When it does, it buys rupees, and those rupees go out of circulation. Now the RBI has two choices.

It can use OMOs (bond purchases through open market operations) to put rupees back in. This is a bad idea in my opinion but we are knee jerk nation and some of this will happen and a lot of words like “calibrated” will be bandied about.

If the OMOs are not high, we will see a contraction in money supply. This with the interest rate hikes will cause a contraction in credit. In addition short term rates will spike up. This could create corporate defaults.