I spoke earlier about how the Real Nifty – that is, adjusted for inflation and purchasing power drop – is now 32% below the 2007 peak, despite the actual index value being about the same.

But that was adjusted for “Wholesale Price Index” (WPI) based inflation. The wholesale index is just one indicator of inflation, and does not consider important elements like services (eg. haircuts, washing and so on) and housing (rent). 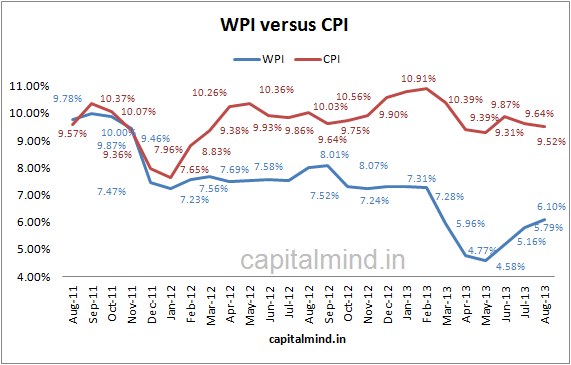 CPI unfortunately is confusing. There are four indexes. The most reliable one – called the CPI (Urban) has only been around for two years. The others – CPI for Agricultural Labourers, Rural Labourers and Industrial Workers. Of these, the only thing that comes close to being useful is CPI (IW), or the Industrial workers number. Luckily we have this data since 1968.

What is Inflation Adjustment?

Let’s now calculate what it means to have invested some money, say Rs. 10,000, in the Nifty in 2000. Let’s add dividends and reinvest them. We’ll end up with some money today. That money can buy things, but it can’t buy the same amount of things it could in 2000. Because those things got more expensive due to inflation.

So, in away, we want to see how much the growth in the index has been, accounting for inflation. If we used the Inflation indexes we can see how much your money has really grown since 2000 – and in the same purchasing power of the year 2000.

And the Winner Is: But in purchasing power, it has increased only till Rs.17,000 if you consider the CPI Index for inflation.

Worse, since 2008, your money has dropped 43% in purchasing power when invested in the index. In unadjusted terms, you still have the same amount of money!

What this also tells you is: if your money hasn’t grown 43% since 2007, no matter what you invested in, you’ve just lost purchasing power.

Finally, here’s the shocker. To regain the same purchasing power, the index has to go up 76%.

Inflation is a silent tax, they say. Once in a while, it talks.