From the last ACC close we do seem to have some intermediate short positions showing in the MACD+Bollinger Reject system.  (HT @anayash and reader Himanshu) 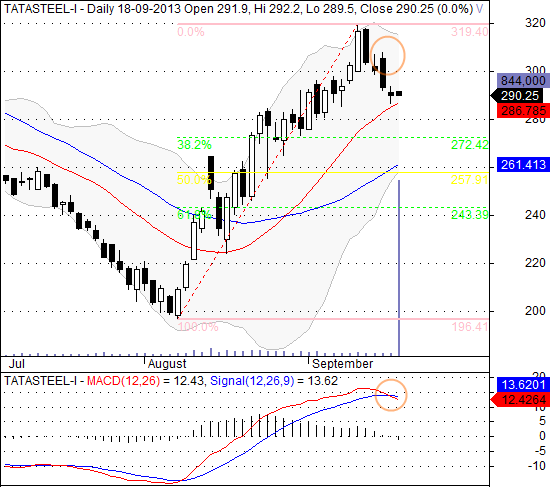 The MACD crossover happened yesterday and there is a potential reject. The stop loss is wide – around 318 at the upper BB, which is why I would be a little careful on this trade. I would maintain a part stop around the 306 level (which is 5% above), but the real stop is 318 today (and it will change and the band changes).

The 272 retracement is an intermediate target. If it takes a few days to get there the lower band is likely to move up there (and that’s the real target).

Another setup is TCS (HT @higirish): 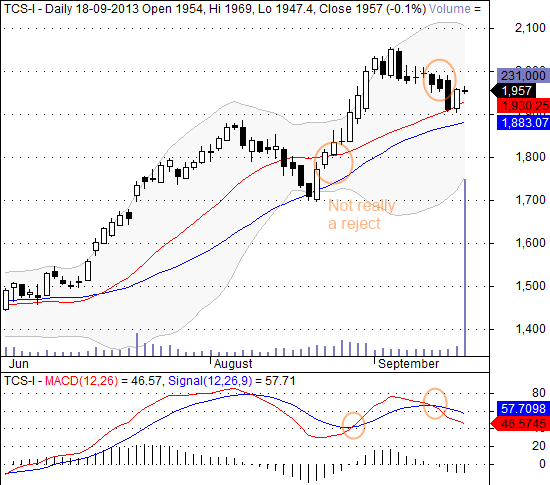 I’m not extremely confident of this either as the reject is not apparent. Effectively this is only the MACD that presents the trade.

But a stop at 2000 makes it lower risk to take it. It may be better, however, to write calls above 2000 (current value: 29) instead. The implied volatilities nowadays are juicy enough and the setup isn’t showing the strength that it should.

(Note: This is not advice, obviously. And this system hasn’t shown me a stop loss in the last five trades, so by the law of averages, it should hit a stop on at least one trade!)