The new RBI Governor, Raghuram Rajan, attempts to open the floodgates of foreign capital into India. Banks that raise Foreign Currency Non-Resident (FCNR) deposits can now get rupees against them while hedging the exchange rate risk for a mere 3.5%.

FCNR Deposits are made in foreign currencies and are returnable in the same foreign currency. So the deposit rates have tended to be low and comparable with similar tenure foreign exchange deposits abroad. Of course, that rate, for dollars, is a likely to be a little lower: 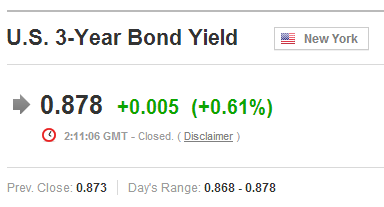 Currently when an Indian bank promises a return on the FCNR deposit, it must convert the currency into rupees and deploy it locally. The cost of hedging the dollar out is about 6-7% per year, and the rupee return is about 10% per year, so the FCNR deposit is priced at very low levels.

But now, the RBI has a 3.5% rupee swap for all FCNR deposits with a 3 year tenure of the deposit. (See notification). That means, banks give the RBI dollars, the RBI will give them rupee equivalent now, and take the same rupees back + 3.5% p.a. when the swap is unwound and return them the same dollars. Effectively the cost of hedging the FCNR deposit is 3.5% per annum for a bank, which will increase their margin.

Also RBI will allow banks to swap foreign currency borrowings of upto 100% of their Tier 1 Capital (was 50%) at a swap rate that is 1% less than market rates. For example, three month rates which had spiked to 9%+ recently will be offered to banks at 8% (1% less than the equivalent market rate that day).

Of course, if a bank chooses not to hedge, and the dollar actually loses value, banks stand to lose (in comparison). At that point, the bank will make a lesser return than it should have, as the market implicitly assumes a 6-7% depreciation per year.

If played appropriately, with little or no risk, the availability of such swaps can be a  money spinner for banks.

This is hugely positive for the bank index (which is up over 7% today), and the rupee (USDINR at less than 66 today). It also has the biggest real impact in the much-hyped Rajan statement yesterday. I will note the rest in a separate post, but I thought this warranted a post by itself.