After selling about $1 billion in June, the Reserve Bank of India (RBI) has sold nearly $6 billion in July even as the rupee broke to above Rs. 60 to a dollar. (Source: RBI Bulletin) 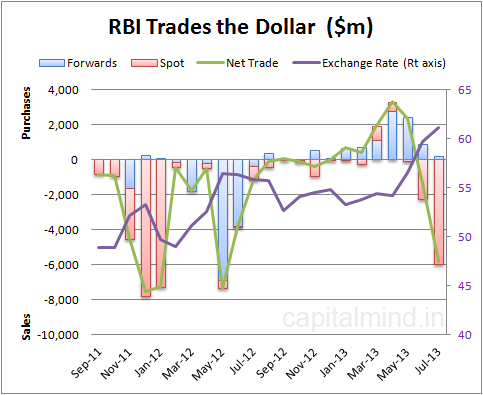 I have also noted forwards in this chart, because sometime in the middle the RBI decided not to directly sell dollars in the market, but to sell forwards instead, in mid 2012, when the rupee broke through 50 and went to 55 to a dollar. The RBI actually built up “short” forward exposure upto $14.4 billion.

The forwards have to be unwound, so you can see the blue “buy” in March to May 2013, as the RBI unwound part of the forward exposure. Even now, the RBI has about $4.7 billion of forward dollar sales outstanding. (These are typically contracts with banks)

Now if you look at the RBI buying and selling the dollar since 2005, the majority of our dollar reserves were built by the RBI buying dollars during the good times – 2005 to 2007. We bought over $117 billion by 2007-08, after which the RBI has had to sell dollars in all years. 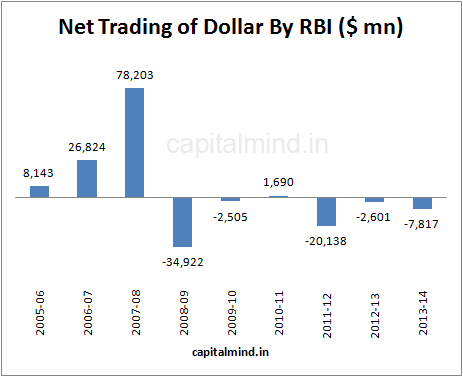 Since April 2008 the RBI has sold $78 billion, nearly all of which it had purchased in one year. In fact, counting cumulatively from 2005, we have reached a dollar “net” purchase level of $46 billion, which is the same level as August 2007. That’s about 6 years of nothingness. 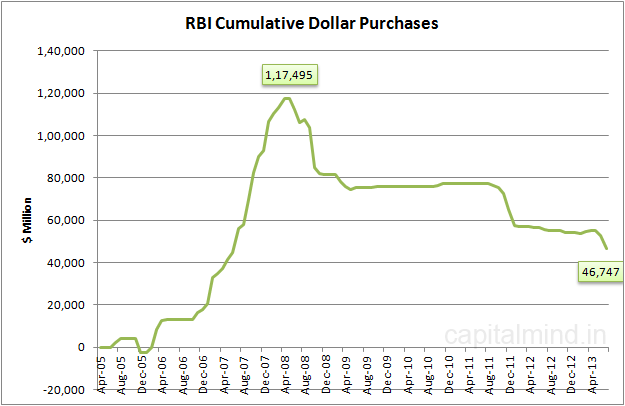 Interesting tidbit: The markets took off in India after August 2007, when the Sensex was around 15,000 (Nifty 4500). Are we going to see the “unwinding” go back to those levels?

Impact: RBI’s selling of the dollar actually takes out rupees from circulation. On July 15, RBI started Operation Squeeze, which basically limited repo purchases from the market, and raised the marginal rate to 10.25%. This squeeze came, apparently, while dollar purchases were taking out more than 35,000 crore rupees (Rs. 350 billion) from the system!

Alongside, the RBI had OMO bond sales of Rs. 2,500 cr. (that much more money was taken out of the system)

July was a tough month, and now we realize how crazy it really was with the RBI doing everything it could to try and regain some level of control. Except, control is fleeting – today, an exchange rate of 61 looks like a strong rupee.

The impact of taking rupees out of circulation will appear in strained bank balance sheets in about six months, especially as liquidity remains tight. If there is a US taper, more dollars will flow out and US yields will rise. I expect Indian bond yields across the curve to rise into March, even though we have a temporary reprieve now, and I expect a huge downside on bank and real estate stocks all over again.