CBI to probe NSEL, says Chidambaram. And the cops have filed an FIR. The noose is tightening around the Jignesh Shah empire,

And it gets worse:

It now emerges that Sinha is involved in NSEL’s current affairs in more ways than one. The company he co-founded used to trade on the Multi Commodity Exchange of India Ltd (MCX), also an FT group firm, which brings to light another conflict of interest.

Sinha co-founded and owned 50% of Agri Vistas Trading Pvt. Ltd, incorporated in 2008. Until early July, he was also one of the directors of this company and signed on the company’s balance sheet.

Agri Vistas was one of the bidders for NSEL’s castor seed stock auctioned on 2 September. The firm that won the auction, Abans Commodities (I) Pvt. Ltd, is owned entirely by Abhishek Bansal and related parties. Bansal partnered Sinha in setting up Agri Vistas and owned a 50% stake.

NSE will now remove Financial Technologies (FT), the promoter of NSEL, from the Futures and Options segment from October 31. The stock was 6% down today at 141. 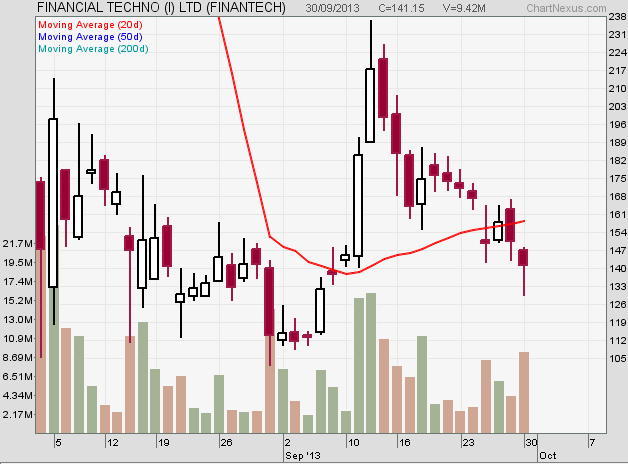 One of the defaulting entities, Lotus Refineries, has filed a suit against NSEL for 2773 cr. They claim they have to receive goods worth that much. This could take months or years to unravel. And it’s ironical because they might actually have a case – that NSEL has to deliver goods in exchange for the money. According to NSEL, Lotus owes Rs. 253 cr. – this amount is only against goods, and those goods are apparently in warehouses controlled by, you guessed it, Lotus! So this case will go on forever.

Read all the posts on the NSEL Saga at Capital Mind.