The ex-chairman of NSEL, Shankarlal Guru, meets Zee News for an exclusive. 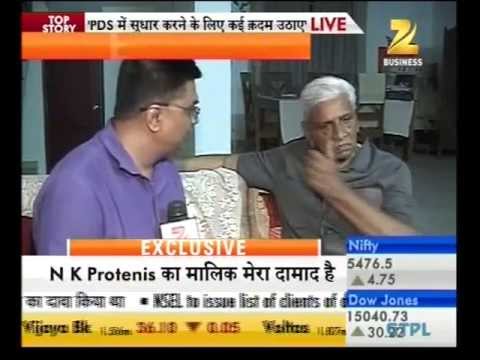 He says he wasn’t aware of irregularities. That some people had told NSEL there was stock, but then there was no stock so the government should recover it. Or that they got to know after investors complained. That his son-in-law is not someone he does business with, and we should be ‘strict’ with him as well.

I think this is hogwash.

There’s very little chance he didn’t know. He probably didn’t understand, but when you don’t understand, you resign, because you are incapable of doing the job. The board cannot claim they were totally unaware – the battles with FMC were going on for a year.

Guru says this is good for farmers. How? Could a farmer sell anything on the exchange? If a farmer sold goods, would he immediately buy them back after 25 days? Then how come the T+2 and T+25 contracts were always the same quantity every single day? That simply says farmers weren’t involved, and aren’t getting benefited.

Second, Guru throws his son-in-law under the proverbial bus. However, there is no bus; no one is interested in actually chasing down the criminals. ED and SIT are now gearing up, finding that the money has flown abroad through hawala, or that a fraud has been committed. But even they are being given ample time so that the fraudsters can cover up tracks.

I don’t believe this, but it’s interesting to see that FT group is losing friends very fast. MCX is now at 400+ and still hitting upper circuits – I believe that is because people believe it will get sold easily to the highest bidder. But Financial Technologies is now at 112 and closing in on a double digit number.