A great question for Prashanth: How does this chart from Ritholtz look like for India?

So I decided to plot the Nifty, the 10 year bond yield (month end values from RBI) and WPI inflation in a single chart. 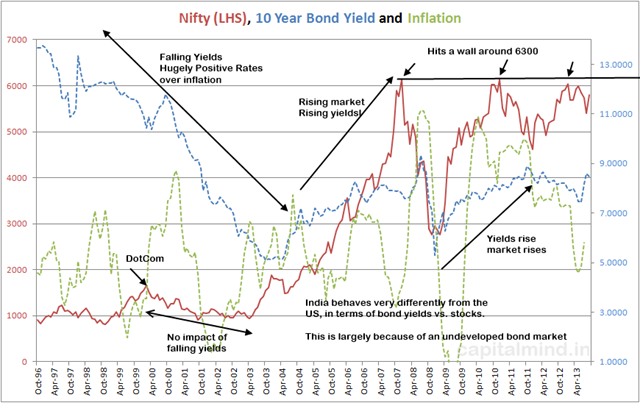 As you can see, India’s bond yields are not entirely related to the equity curve (other than from 2011, perhaps). As yields fall, equity markets should rise as money becomes less expensive to borrow – but in India, the bond market is not as well developed, so the transition was absent in the late 90s.

The early 2000s saw bond yields going up from about 5% to 8%, but the markets went up even higher! inflation was benign through this period and mostly, we had positive rates (interest rates higher than inflation).

From 2008, we have had a flat market, and yields have both fallen and risen with the stock markets. Only since 2011 have we seen bond market yields go down while equities have recovered.

The upper 6300 barrier has been a fairly stiff resistance now with three hits in five years. I wonder if this current upmove will take us there again.