This is just a heads up. The fear is that something is happening in Syria. But these are rumours and the following could be an overreaction. Russia supposedly detected missiles in the Mediterranean, however this is like saying that someone sighted a non-potholed road in Bangalore – unlikely, but we all know they could exist.

The Nifty has crashed over 3%, with banks down over 5%. 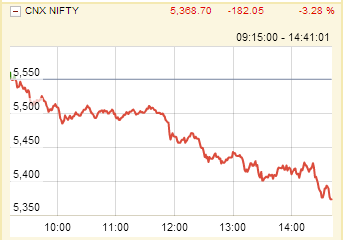 Gold and oil haven’t, for the most part. Brent Crude is still at 114, and Gold still under $1400. This probably means it isn’t Syria. So what is it? We’ll know soon. Prices come first, everything else, later.

This could be “blood on the streets” and thus, a buying opportunity, or an early indication of weakness. While I wouldn’t recommend jumping in to buy, it’s useful to make a strategy saying: If the index falls below 5,000 I might want to buy stocks A, B and C. I’ll post my list when that happens.