The Index of Industrial Production (IIP) for July 2013 was revealed to be at 2.63% over July 2012. This is a huge improvement, and long term readers of Capital Mind will know how much I trust this data. (For short term readers: I don’t). 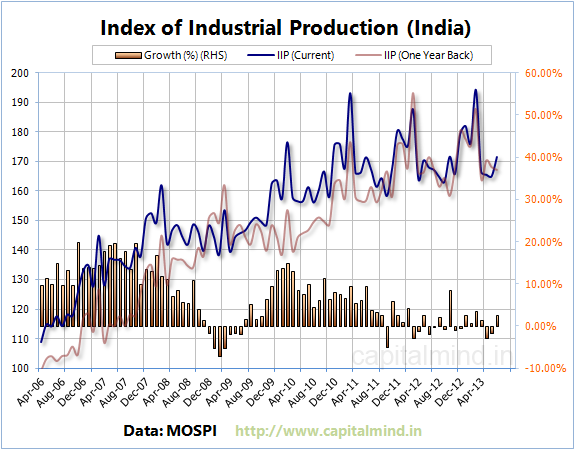 And this is preliminary data – it will be revised a month later and then two months later.

Revisions: Data for earlier months has been revised, both up and down!

Manufacturing and Electricity Save The Day 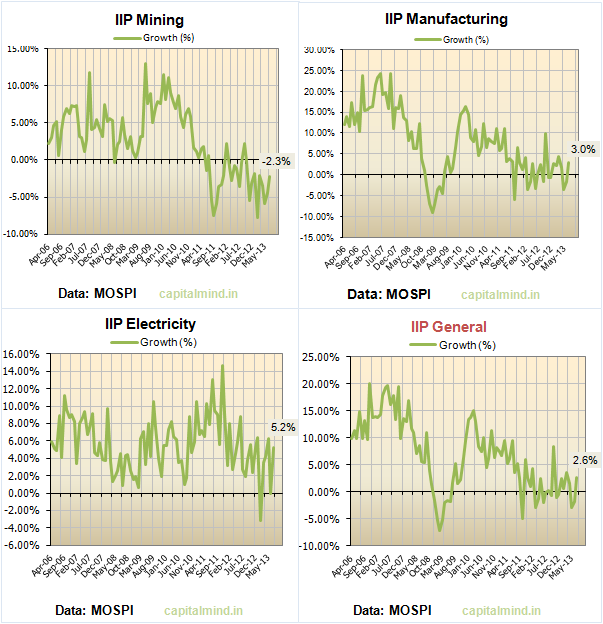 This data will change with revisions. However, even with this “increase” we are still growing at very low percentage points (even lower than GDP growth). This looks like a sorry picture.

Looking at things from a use-based angle, the real problem is visible in the Consumer Durables angle, which is down 9% from the previous year. This has implications in multiple ways – first, that we’re not producing that many durables any more (and probably importing them?). Second that we are probably cutting down on durables (like fridges and a/cs, mostly discretionary buying as compared to essentials) because inflation and high interest rates are slowing down growth, causing a crunch in spending, so we go to the essentials instead.

Rumours were that this would be a bad IIP. The market closed down over 1% today. I expect we will go back up tomorrow, at least initially, until it strikes us that wait, even 2.6% is a horribly low number.