The trade data for August 2012 shows a marked increase in exports, with flat imports (in dollar terms), making it possible for the lowest monthly trade deficit figure since March 2013. However, this data will be revised. Note that this doesn’t include any service exports (like IT) which will only come in the Balance of Payments data about 5 months later (and it is aggregated for the whole quarter)

This is a relief – to see exports up 13% and imports flat in dollars (even though it means a higher rupee value for both because the rupee fell). The trade deficit in dollars from April to August was actually lower than last year, at $73.37 bn. versus $74.67 bn. last year. 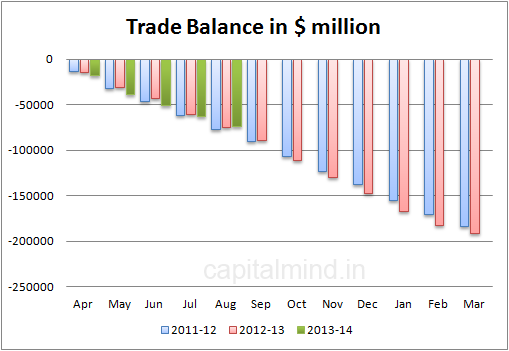 Marked in rupees, though, the year to date figure (April to August) saw Rs. 4.21 trillion (lakh cr.) as a trade deficit versus Rs. 4.08 trillion, a 5% increase in deficit, because of the rupee depreciation against the dollar. 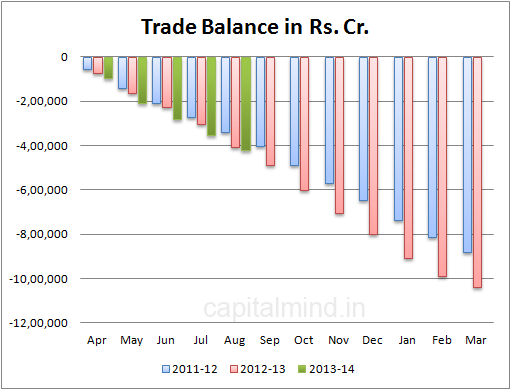 If you look at last year, this is not hugely positive data. We were at these levels – it was subsequent months that killed us.

The trade deficit is now over Rs. 400,000 cr. which is about 4% of GDP and a fairly scary figure. Not much more scary than last year, though.

What’s interesting is that crude imports, for August, were up 20%! Non oil imports meanwhile fell about 20% to compensate. Gold imports fell to 0.65 billion, it seems. But in dollar terms, oil and non-oil imports both rose from last month. Oil imports have been increasing in the last two months, and after a sag to July, non oil imports went up as well. 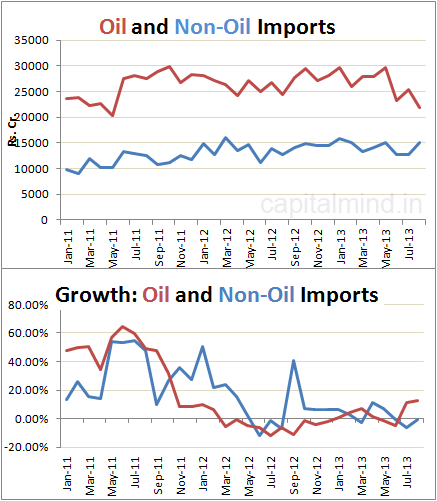 Impact: The markets have liked the data. The dollar has now slipped to less than Rs. 64 per dollar, from the Rs. 68 it was earlier. Of course, part of that is because of dollar inflows from NRI fixed deposits and potentially positive FII flows.

However, note that this is going to be revised.

The Nifty is up 3.8% in the day and over 15,000 cr. has been traded in the cash market. Oh, this is the rip-your-face-off rally and people who were short have been hurt real bad. There may be a better shorting opportunity later, but right now, this trade deficit cut will help the economy only a little bit.

Eventually, the fact that we have a continuing deficit that needs to be financed by debt or capital inflows will triumph and again, we will end up in a tizzy when flows stop. We’re too far away from the point of “self-financing” through trade alone.