The 8% growth in corporate tax collections is low, but personal taxes have grown massively at 21%.

Now these numbers are upto September 17, when the advance tax date (September 15: 30% of estimated full year taxes) is reached. There shouldn’t be any meaningful difference to this to the end of September, one thinks.

Let’s now compare end-September numbers for 2012, from the Comptroller General of Accounts (CGA): 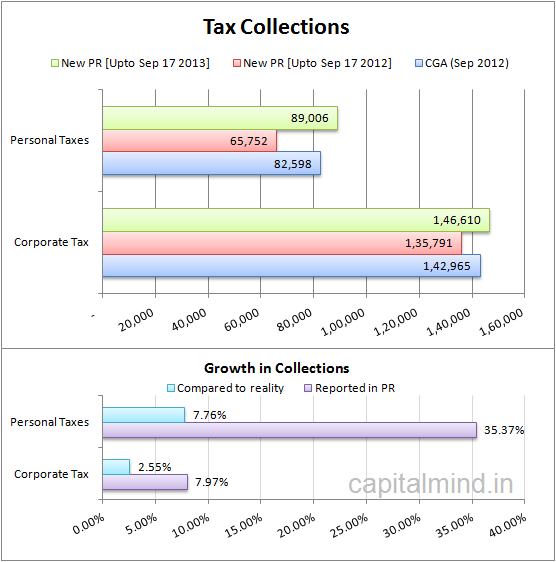 Much of this will be confirmed with data for September is finally released, and that is in end-November. But already, the inconsistency is showing.

How shady are these statistics? I tend to believe the CGA because, at the very least, they give you numbers that aren’t revised every few days.

Impact: A lower tax collection figure than reported means a lower revenue number, and direct taxes make up for more than 50% of the government’s revenue. (The rest are indirect taxes like customs and excise duties and service tax, and other receipts like when they sell stuff)

Now we have expected total expenditure growth of 2.5 lakh crore (trillion) this year. And Revenue was expected to grow 20% (from 8.8 trillion to 10.56 trillion). Expenditure remains on track (we’ve already spent 33% of budgeted expenditure till July 2013). Revenues (blended) might only grow 10%.

The fact that this is a problem was confirmed with yesterday’s news of austerity in govt expenditure.

This means a wider fiscal deficit, more government borrowing and crowding out of the private sector.

While the dollar has recovered, it still remains 10% below last year’s levels, and that will keep the current account deficit under stress. The twin deficits are inflationary, and will need higher interest rates to control. And the dilemma is – higher rates make the government pay EVEN more as interest, and slows growth, which, uhem, increases the deficits.

The biggest immediate impact is in what happens to interest rates. Given there is no chance the government will cut big-ticket expenditure in an election year, and the chance of a US taper in the next six months still strong, it may be useful to raise rates and curtail inflation to counter the impact.