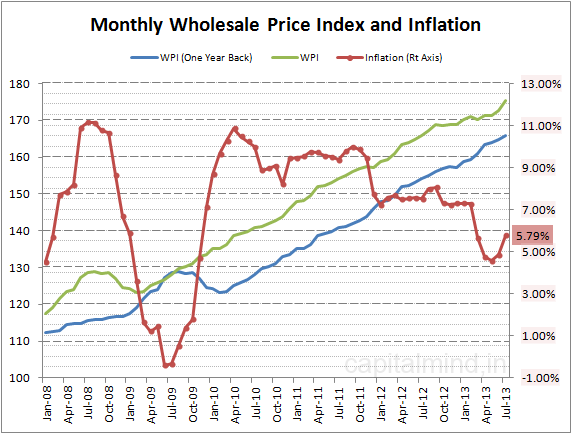 The cause for worry is that the green line above has resumed its upward movement and that inflation continues to creep up.

Component wise, Primary Articles have gone up 9% and fuel is up 11% (largely on rupee depreciation). Manufactured goods is at a slightly difficult-to-believe 2.81% and it carries the biggest weight in the index. 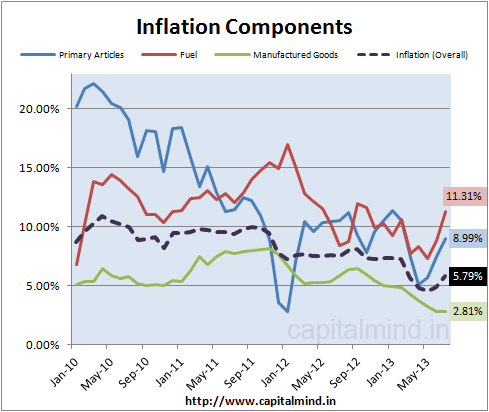 Impact: This should definitely cause the RBI to not want to reduce rates. Raghuram Rajan, the next governor is more focussed on inflation than growth, and it’s even likely he will raise rates. In any case, short term rates (which is what the RBI controls) are way too low – even call and CBLO rates are at 10%+. However, a rate increase is negative for banks because it might be a retracement of the rate cut trend started last year.

The other impact is that GDP growth will hurt with this kind of inflation. When prices rise and incomes do not, then the only choice is to cut discretionary spending. If you notice the IIP closely, there is absolute carnage in the “Consumer Durables” section of the IIP, it is down between 10% and 18% in the last two months. Auto sales have been down a while now. Consumer durables and cars are largely non-essential items, and the cuts in their demand point to inflation hurting discretionary consumption, the first to bite.

I believe along with the liquidity squeeze, high inflation will be negative for stocks in the near term. But this doesn’t apply to pharma and IT, and of course in cases where stocks have been battered so much you kind of wonder if there’s a serious crisis you didn’t know about.