Markets are down over 2% and Banks over 3%. There are reasons, and some of them were the capital controls imposed on Wednesday, and the fact that Chidambaram came on TV, which is typically a bearish sign, as I find out from traders at the conference I’m in.

Look first at the US 10 year yield: 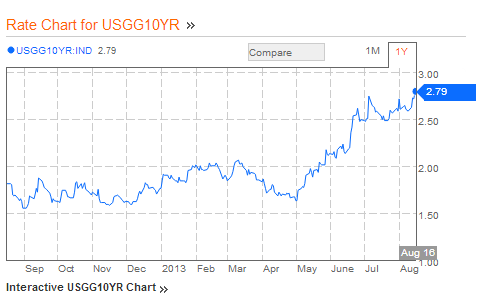 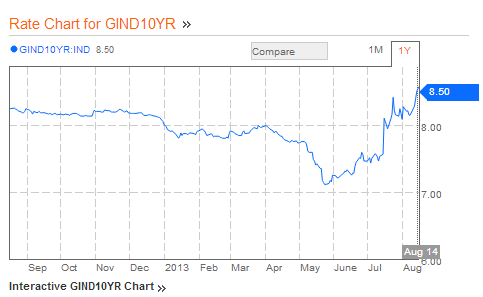 And this is the 2023 bond. Literally every single other bond is trading at 9%+. 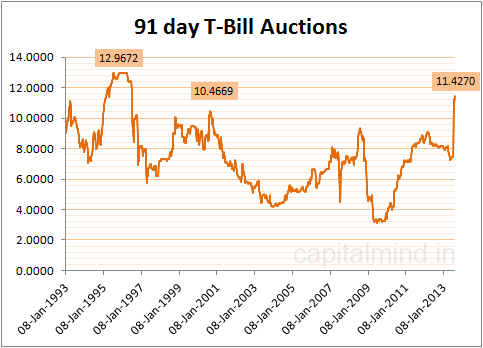 If there is a fear of a US Taper, then US bond yields rising means investors are selling bonds, on fears that the US Fed will stop buying.

That fear should propel exit from debt in other countries as well. If money flows out of US govt. debt, it will flow out of Indian govt debt as well. Foreign investors are exiting our debt markets – both corporate and government – largely on this global trend and fears of a taper.

While 11.5% is an interesting yield, the rupee depreciation – more than 5% in recent months – will have created a smaller net return.

Additionally, the capital controls and trading restrictions don’t allow easy mechanisms to hedge the currency risk. Already banks are restricted from forex exchange positions (on a proprietary basis) and they won’t be happy to take the risk on a longer term hedge if they can’t offset it easily. Capital control announcements create a fear that eventually they might restrict dollars from going out in any form, so investors want to move out before that.

If the rupee is falling (and it crossed Rs. 62 briefly today) then it really means the fear is materializing.

At this point, equity markets are hosed and banks are going to be hit even more. That is part of the game, so it’s nothing to worry about.

What is worrying though:

On the market side, I would probably say non-debt taking exporters – most IT companies and pharma – should benefit. However, when people exit, even those prices could be hit.

Disclosure: I have both long and short positions in the markets.