In 1961, when Kennedy became President, the US was going through a recession. The answer was to lower interest rates, but since rates were higher in Europe (and money was backed by gold), the fear was that people would just take their money and gold from the US and put it elsewhere. The yield curve was normal – that is, short term rates were lower than longer term ones.

Since businesses borrow longer term, and arbitrageurs play in the short term, one idea was to keep short term rates high (so arbs will bring money to the US) and long term rates low (so businesses can borrow at better rates). This could have been achieved with the Fed buying the longer term securities, while the treasury (the government) issued more short term and less long term securities. Effectively the yield curve was being moved from an upward sloping one to a flat one, which explains the “twist”.

Note that a few factors helped:

The impact: There was no major impact for about six months. While the program was launched in Feb 1961, by October, short term yields had fallen (from 2.42% to 2.3%) and long term yields had risen (3.84% to 4.01%). However, slowly over four years, the yield curve flattened out as we see here: 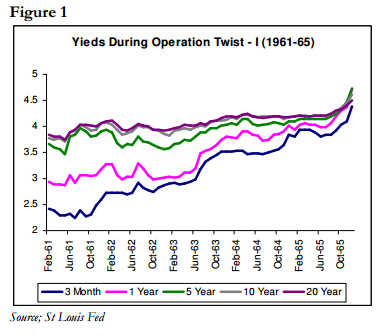 Why will Operation Knicker-Twist (India) Fail?

The RBI is trying something that sounds dangerously like Operation Twist of the US. It’s being called Operation Knicker-Twist, because we at Capital Mind know what is getting twisted. The concept is the same – reduce long term bond yields but maintain high short term rates.

The conditions in India are not conducive for such an action. (That is the PR version. The real sentence is: Have we gone batshit insane? But I digress.)

Why it will fail is that this is not well thought through or designed. Doing something like this a month before a new governor comes in, if it meant to be a longer term measure, is a little weird – I hope that Mr. Rajan is not involved in its construction. If it is not meant to be long term then it will fail before you can say “twist”.

What is my solution? I’m suddenly not sure of the problem in the first place. The liquidity tightening will work in about a year, if you just give it time and stick with the program. Let the dollar go where it has to, control inflation (pretty much all that the RBI can impact right now) and don’t create panic by knee-jerk reactions. There will be defaults, and there will have to be bank mergers or rescues, so prepare for that anyhow. Cursing gold imports, reducing trading and doing the wrong thing with a good market will only hurt us and create fear in the minds of outsiders who want to invest. We’re a darn big economy, now let’s behave like one.