ET reports the story on the quasi-settlement and has a very disturbing data point:

Adding to the sense of crisis, it has emerged that NSEL’s settlement guarantee fund has dwindled to Rs 60 crore from Rs 800 crore.

WTF? How does a guarantee fund fall like this? Were there defaults? When? Apparently not really recently:

Funds at the exchange’s settlement guarantee fund have dwindled to about Rs 60 crore from Rs 800 crore. Explaining the decline, Anjani Sinha, the managing director of the exchange, said the depletion is after adjusting for liabilities of the March settlement.

March! That was more than four months ago! How come just a few days back (August 1, Business Standard), the CEO Of the exchange says:

The exchange also has a settlement guarantee fund of Rs.800 crore. 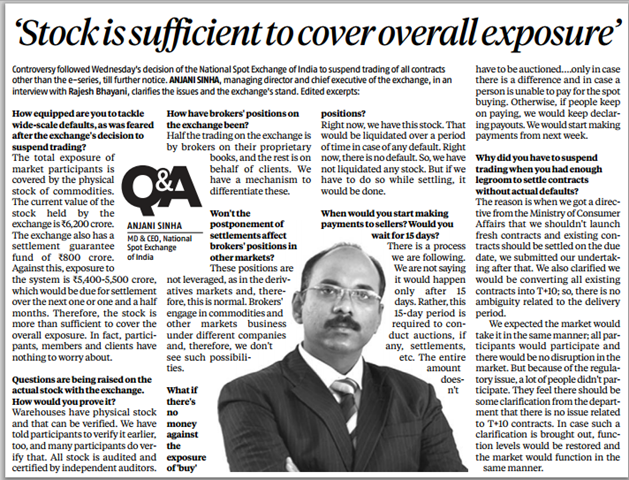 How is this not an outright lie? If the guarantee fund had dwindled to 60 cr. in March, why did he say that there was 800 cr. in it on August 1?

Or was it that March is just an excuse and the more well connected and powerful people have yanked off their own money upfront, leaving everyone else to hold the bag?

I know we are a third-world, corrupt country, but really, is this how we do things, by lying ? You want to complain about FDI again, about why they don’t want to invest in India?

Everyone that was part of this mess who is guilty of a fraud needs to go to jail. I don’t know whether legally this is “fraud” or not, but I believe this is pretty much as close as it gets.