The Food Security Bill has been passed and markets don’t like it. Banks are down 5%. Everything has crashed across the table, except for IT. 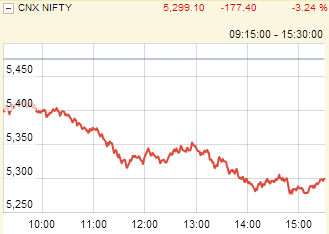 The dollar meanwhile had briefly crossed 66, but is at 65.65 right now.

We aren’t heartless bastards in the markets. The fear is not that people will be fed. The fear is that more food will be accumulated in godowns and made to rot, while more people die hungry and even more have to scrounge around for food. The fear is that the MASSIVE government purchases will leave very little for the rest of us to buy, that we have to pay a much higher cost (read: inflation). The fear is that the government will let so much money be siphoned off through this program, while paying for it through borrowing, whose costs will go through the roof and hurt everyone.

The writing is on the wall. Our children will pay for their sins. And they don’t care about our children.

It’s not just the Congress. The BJP agreed to it as well. The food security will not give us food, or security, but only give some people bills.

You know when a plane is about to crash, they tell you to sit and put your head between your knees? This is that time.

And while you’re at it, kiss your ass goodbye.

(You can tell I’m pissed off)

The only hope now, and this is a prayer more than a hope, is that the government machinery runs so inefficiently that they never get to implementing this program any time soon. But as we will notice, anything that involves spending is done fast. Anything that involves actual benefits will not happen. So they’ll procure fast, and probably never distribute. Thank goodness this year has had bountiful rainfall; even a normal monsoon will now be a drought.