I’ve been getting a few questions about NSEL and its operations. Here’s my quick take.

Aren’t NSEL’s contracts fair anyhow? So what if people wanted to finance using them?

Firstly, if you set up a financing scheme then the system has to be regulated in terms of assessment of NPAs, provisioning and margining. You would actually need very strong margin management, customer wise position limits, capital adequacy checks of the exchange, etc. So yes, it’s ok to run it as a finance scheme, but you should just finance, not do this drama.

What it has done is push agri products into warehouses while people play with the money used to finance them; effectively keeping those products out of the hands of people who will consume them.

Thirdly, they got approval for one day forwards. What they created T+25 and used some technical language to call that a one-day forward, that was in my opinion a violation of rules.

But what if there was a genuine arbitrage?

People will tell you that farmers wanted to sell today at price X. Mills (who use the stock) wanted to buy 25 days or so later, but at a higher price. Who is stupid enough to do this consistently? Are all our mills running on serious JIT inventory management techniques that they are willing to pay 15% (pa) higher to get stuff late? Isn’t village land ludicrously cheap enough to be able to store the darn thing for nearly free even if it is so?

But the genuineness of the arbitrage fails when you look at any contract of the near and far terms. You will find that nearly at all times, the open interest in any near-far contract is EXACTLY the same.

Take a look at the Castor-Seed contract for Kadi delivery – there is a 3 day contract, and a 36day contract. If there was genuine end-user demand for these contracts, then you might find at least a few open contracts at the 3 day level that will be higher or lower than the contracts at the 36 day level. Answer: No. Looking at EVERY SINGLE DAY in 2013, not a single day did you find a difference in the open interest between the two contracts. There are volume differences but that could be due to intraday trading (no longer allowed). Here’s a sample from Jan 2013: 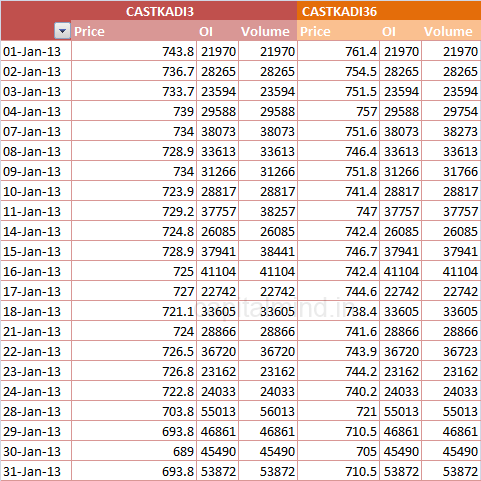 Were the contracts designed for such financing? Did the exchange know?

I give you exhibit #1: The Jeera (Cumin seed) contract specification, which says:

Storage Charges are waived off for those members and their constituents, who sale Jeera on JEERUNJH25 out of the delivery receivable against the purchase position of JEERAUNJH2 contracts.

So if you specifically make it cheaper to do the round trip trade rather than take delivery…well, it’s difficult to say the exchange was not aware.

But isn’t it all backed by collateral? What’s the problem then?

Here’s the operation: a “lender” buys a 2 day contract and simultaneously sells a 25 day contract. The ‘borrower’ gets money after two days, and will have to return it in 25 days and take his goods back.

So what happens if there’s a default in the 25 day contract? Answer: they have 2% margin from the buyer of the second leg (the “borrower”). And then they have the goods.

But in a system wide crisis, they can’t easily sell the goods, because the market prices will fall especially when players know someone’s going to dump a large amount on the market.

This is if you believe the goods are actually at the warehouses, and haven’t been spoilt after years of this moving back-and-forth thing.

What’s next? Will I get my money back? Does that mean FT is a good investment?

I believe most investors will be paid back, at least partially. The sad thing is that FT hasn’t immediately dipped into their settlement guarantee fund, but it’s a little doubtful how that fund is composed – if it includes broker deposits then that part can only be used to guarantee against defaults from that broker’s clients.

But there definitely is some stock, and over the next few months they might be able to repay most of the money. They will need to liquidate stock slowly to ensure the market doesn’t collapse. But in some situations where they are a large part of the (remaining) market, prices will fall anyhow.

As they recover money they will pay back and it’s even possible that investors get paid off in full, eventually.

But FT’s reputation looks increasingly weak. Unless they pull off a huge turnaround like paying back everyone immediately and taking the hit themselves (by borrowing or getting a large agri-based investor). Short of that, their future revenue growth – claimed to come largely from exchanges, in India and abroad – is going to be stunted because no one will want to deal with an entity that delays settlement.

There is a big political angle to this as well. If agri-good prices tank, farmers will hurt when they bring their produce to the market. It’s even possible a government agency or FCI helps. Remember, this is what the US Fed did with banks who had “dodgy” assets – gave them time to unwind, and even bought some of those assets to help banks tide over. But the question I leave unanswered is: Is NSEL too big to fail?