Adding to the list of defaults is Shiv-Vani Oil & Gas Exploration Services, which has not repaid Foreign Currency Convertible bonds of $84 million. ET Reports that lenders have filed a winding-up petition to recover their money.

But Shiv-Vani doesn’t seem to have the amount due right away. The FCCB was taken in July 2010, going by their annual report, with the following conditions:

The Company has issued 5% Foreign Currency Convertible Bonds (FCCB) of US $ 1000 each aggregating to US $ 80 million during the year. These bonds are convertible at the option of the Bond Holders into equity shares of `10 each fully paid up at the conversion price of ` 515.60 per share calculated at a fixed rate of exchange of ` 47.08 for US $ 1 prior to the close of the business hours on 07th July 2015.

Since the principal wasn’t due it’s quite likely the company hasn’t paid it’s coupon payment (5% every year, or $4 million), which has triggered the default.

With the current exchange rate of Rs. 61 to a dollar, the stock price needs to be Rs. 668 just to break even. The current price of the company is, well, slightly below: 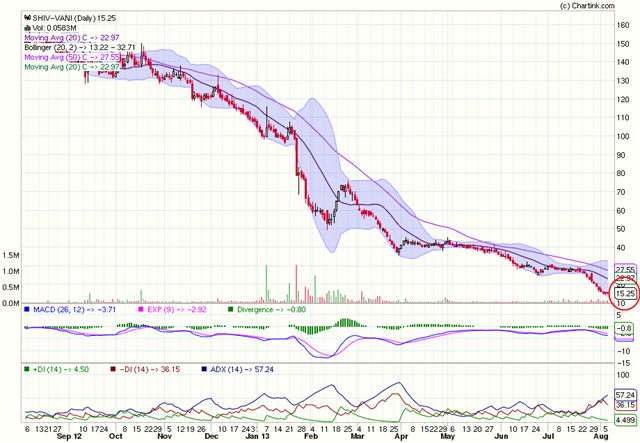 And more trouble: ONGC, it’s biggest customer, has banned it for three years from Feb 2013, and it faces a tax evasion charge of Rs. 200 cr.

This may be a small default by FCCB standards, but it’s another case where foreign investors are going to be seriously worried about the delay in the legal mechanism of recovery. If we’re really serious about getting foreign investment, we should reform legal processes (and get more judges!).

Some shareholders – notably, Reliance MF’s Growth Fund, still owns a considerable stake, and many others are probably financiers who had pledged shares, now converted. If it’s tough on debt investors, it’s even tougher on equity holders.