That was a lie, it turns out.

Remember when Ramesh Abhishek, Chairman of FMC had made a big statement that he had requested that small investors would get paid first?

That is also probably a lie. 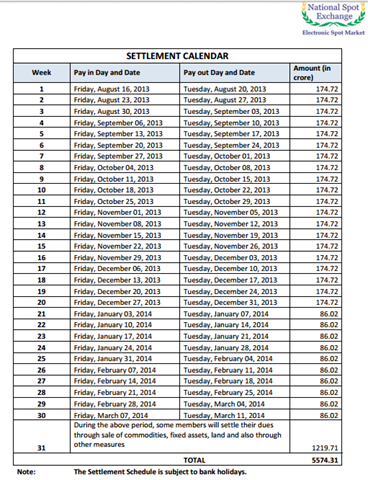 And there’s Interest! But, er, at the end?

These members will pay 8% simple interest on their outstanding amounts,and the entire interest will be paid out at the end.

Will this plan work?

Then they have backtracked on an earlier quasi-settlement where 2100 cr. was ready to be given on time. Where has that money gone? Have those people decided that if they can pay on an EMI basis, they might as well put the money in the bank and pay over time instead? Why isn’t that money being paid out immediately?

I don’t believe this settlement will happen in this schedule. The FMC has to approve, it seems

But I believe they might pay a few “installments” just to keep people at bay. But the amounts involved are too large, and the people they owe too influential for them to get away easily.

Why are they still in control?

If the exchange can’t meet its dues, management should be thrown out, and SEBI/FMC should come in and run a very rough ship including putting criminal fraud cases on any members that have wilfully defaulted. And chase the money trail to find out if it ends with any of the promoters of the exchange and if so, put them in jail.

The FMC/SEBI combine can easily monitor the payments and take

Why is NSEL’s current management even allowed to enter the building?

There is a Trust Deficit

This is an extraordinarily long time to settle what can easily be gotten by selling stock. Even if they could sell even Rs. 1,000 cr. of stock, they should do so and make those payments immediately.

Chances are the stock does not exist. In fact most people are now convinced it doesn’t exist.

If the stock doesn’t exist, then the exchange and these "24 members” who now control the stock, have lied to us all along. Why would you believe their fancy payment schedule now?

Will they do the same thing at MCX?

If there is a default from members at MCX, will they dishonour their commitment as an exchange?

On Tuesday, there is an open interest of more than 16,000 cr. at MCX. The OI hasn’t come down much since August 1, when the NSEL scandal broke out. Are people going to be comfortable with MCX going forward if any of these NSEL payments are missed?

The FT stock fell another 10% today, but Friday will probably see a bigger reaction. Given the kind of market this is, I wouldn’t be surprised if the stock went up! However at a fundamental level, it is a little bad for a business that is supposed to run exchanges, to tick off brokers and have a settlement crisis.

Btw, I love this statement in their circular:

In case any payment is not realized, then the Exchange shall take measures as per its Rules and Bye laws.

Yeah, really? They already haven’t paid on time. What rules/bye-laws have you used, tough guy? They’ve called your bluff. 24 people have held your exchange to ransom. Some of them are related to your chairman. I don’t think anyone believes you will take action.

While this settlement is some news, it’s probably not good news.